We had to keep pinching ourselves: “Is this real?!” As we entered the lagoon, motoring the dinghy 1 mile from Aldebaran to shore, the colors just became more insane.

We had arrived at an iconic South Sea paradise. Coconut palms leaned over the white sand beach which separated the aquamarine crystal clear water from the dense palms & pine trees of the island vegetation that was home to thousands of birds that flew overhead and nested on the ground.

When we arrived it Pitcairn after sailing 3 weeks, with just ocean and sky, it felt like we had entered a parallel universe into a wayward civilization. Now we had just crossed a magic portal and arrived in Oeno, our first atoll of the South Pacific.

Read more about the Pitcairn Islands and our voyage:
http://www.greencoconutrun.com

Enjoy the photos, videos, and recipes on Green Coconut Run? Support by becoming a Patron and get sweet perks: http://www.patreon.com/greencoconutrun

PHOTO: Sabrina, Kristian, Spencer, and Michael on the “Lambordinghy”, getting ready to land in Oeno. Photo upload by satellite. 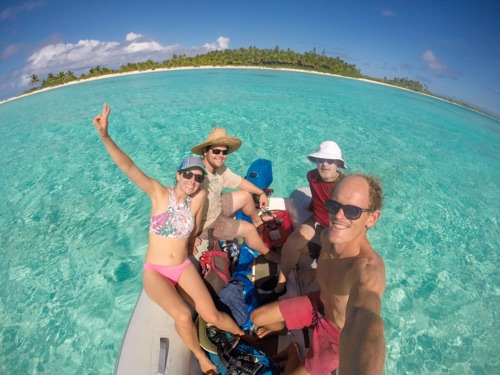 6 thoughts on “Dinghy ride to Oeno”