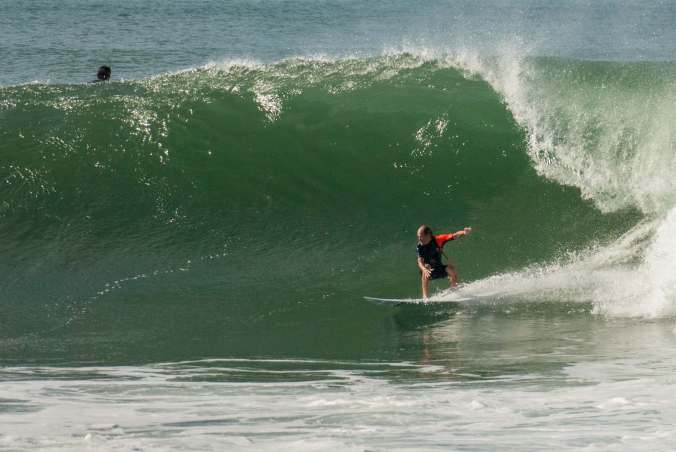 Captain was looking forward to Sinaloa’s lefthanders, but he was happy on this backside ride.

“I’m going to stay on the boat,” sighed Kristian, as we loaded the skiff to surf. Fifteen foot swells jerked violently at the anchor snubber. We were 1.5 miles offshore but the depth sounder still read 30ft. Huge rolling swells whipped Aldebaran around like a toy.

We had just finished a 2 night crossing of the Sea of Cortez, complete with a fantastic show of spinner dolphins doing tricks over the azure blue water. Strong seas had blown out one of our beloved nets, which gave the boat a battle-worn, haggard appearance. To top it off, early May’s so-called “Platinum Swell”, one of the largest of the year, greeted us at Sinaloa’s famed left points. Scanning the horizon, Ryan lamented, “Looks big and unruly.”

While the captain looked after the mother ship, we took our trusty inflatable, Lunabel, to the inside of the point. It didn’t take long before a rogue swell pulled Lunabel’s anchor and we almost lost her as she drifted helplessly towards the shore pound!  We frantically paddled back and called it quits on surfing.

After an anxiety ridden night in Barra de Piaxtla, which under those conditions felt like a washing machine on super cycle, we sailed to the city of Mazatlan. We had to deliver Eric and Brian, our diving buddies with whom we had just shared an amazing 10 days in the famous islands of the Sea of Cortez.

With the moon high over the grand Pacific and crowds promenading on the malecon (waterfront boardwalk), we danced in the back of the taxi pickup truck, and marveled at being in a city after a couple weeks of ocean wilderness. We had given up on surfing this historic swell… but the next day we had the most unexpected surprise…

Kristian woke us up early with uncharacteristic excitement. You see, the captain is notorious for dismissing all but the best conditions.  His late night research had revealed an amazing wave which only breaks every blue moon, accessed by boat.

The “rare bird” decided to smile for us. It was a perfect, powerful righthand reef peeling off a picturesque island.  Only one surfer was out and we surfed the best waves of our trip for six hours that day… with only a few urchin spines to remove from our feet. With a city of half a million people, we couldn’t believe we were getting these waves mostly alone. The hoots of stoke were sweet song to our ears, redeeming our Herculean anchoring efforts during the last few days. 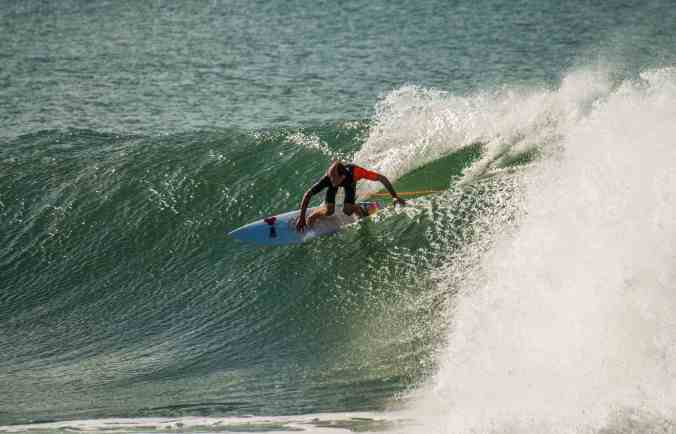 Kristian usually rides 80’s boards, but put him on a potato chip shortboard and an orange wetsuit and he’ll do his best pro impression

The next day it was gone… the rare bird shone for 24hrs. We worked hard on Aldebaran, installing temporary replacements for the net that blew out in the passage. Filling propane tanks required three different visits – nobody had American valve connections – but eventually a screw driver got the job done.  Filling diesel was also a task, as it was unavailable in Old Town harbor; we motored an hour north to Marina El Cid and struggled with the crowded dock.

We were preparing for an overnight passage to a remote island 60nm south. Isla Isabel, known as the Galapagos of Mexico. It is a square mile volcanic island in a National Park, with stories of crazy birds, bountiful fish, and amazing craggy views. 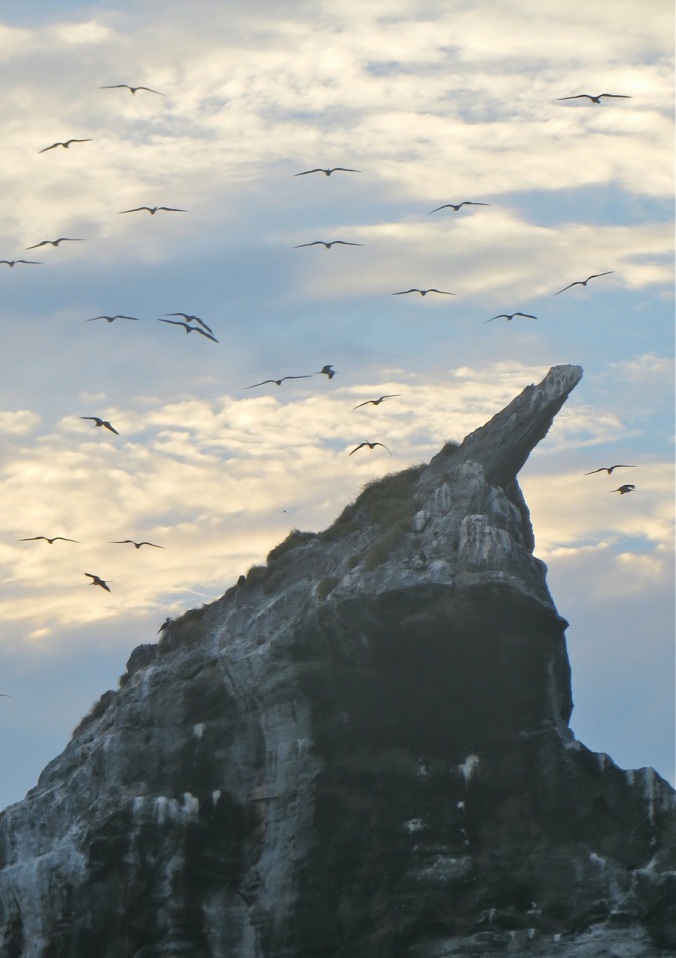 Approaching in a musky grey sunrise, rivers of birds flew through the sky. They never ceased the entire time we were in Isla Isabel.  We jumped in the water to freedive a half submerged crater islet, reminiscent of Molokini crater on Maui, where we encountered a phenomenal underwater world. Around the crater swam an endless number of fish, probably the most complete marine ecosystem we’d found so far on our voyage: from huge schools fish of reef fish to large predatory Jacks skittishly eyeing us. 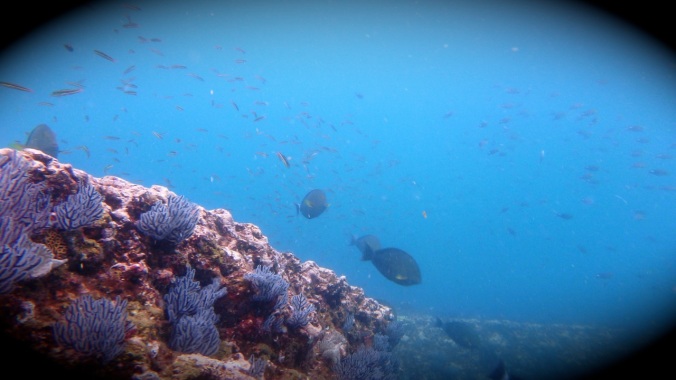 The island is open to fishing and the spearfishing was excellent. Everyone got out of the water except Ryan, who then had a magical encounter with a friendly whale shark, which rubbed its body on his before swimming away. 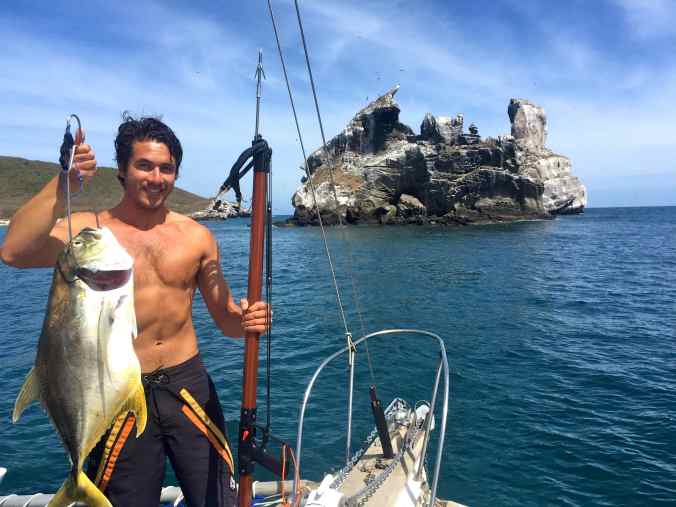 The boys each shot a hefty Jack and our freezer was packed with fish!

That night, we anchored in the lee of bizzare offshore rocks called Las Moñas. White sand beach spilled into a gorgeous cove with fantastic snorkeling in shallow water. On shore, vast numbers of blue footed boobies nested in scrubby underbrush. 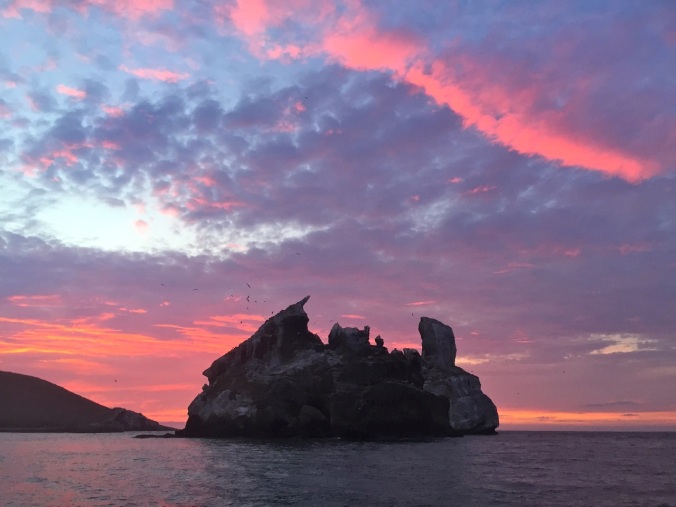 We anchored next in the southern cove, and SCUBA dove along an underwater cliff pockmarked with caves. Here were by far the largest eels we’d ever seen — with the girth of a human being, but twice as long, they looked like dragons, receding into their underwater caves.

Wondering, “what next??”, we paddled our SUPs to the main fishing camp on shore.  A short walk revealed a crater lake.

The crater lake at Isabel

A gigantic colony of frigate birds was the next jaw-dropper. They nested in trees as prolifically as salmon running up a narrow Alaskan river. Iguanas crawled along the paths in the derelict national park center, evidently abandoned for some time. 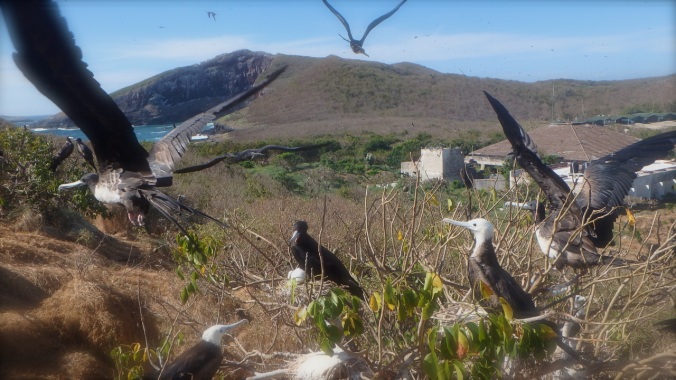 We climbed past the iguanas and frigate birds to climb to the lighthouse, where a panoramic view swept 360 degrees. Waves crashed on the west side of the island, its wild, windy side; separated by a thin ridge of land, Aldebaran bobbed peacefully in the east side, the smooth, lee side. 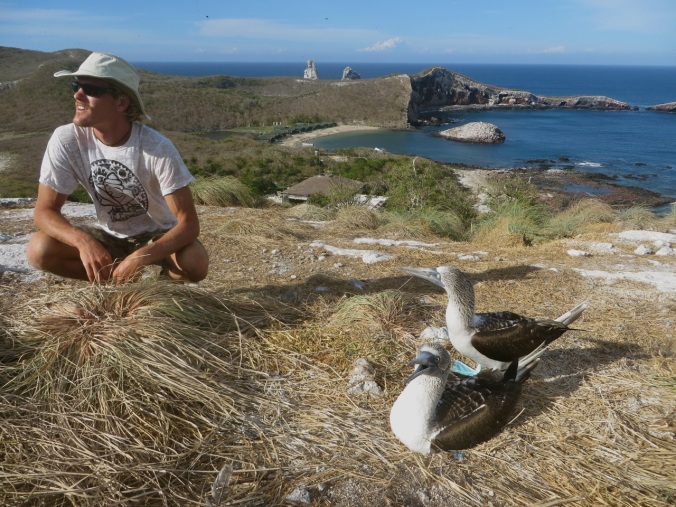 Kristian and some boobies

On the hill top, we found more boobies!  Here were lime green footed boobies, with more slender necks, sharing the territory with their blue footed cousins. They clucked angrily and refused to move if we approached their nests, which were directly on the ground. It was hard to pull ourselves away from this magical place, which had an aura of the Jurassic era. 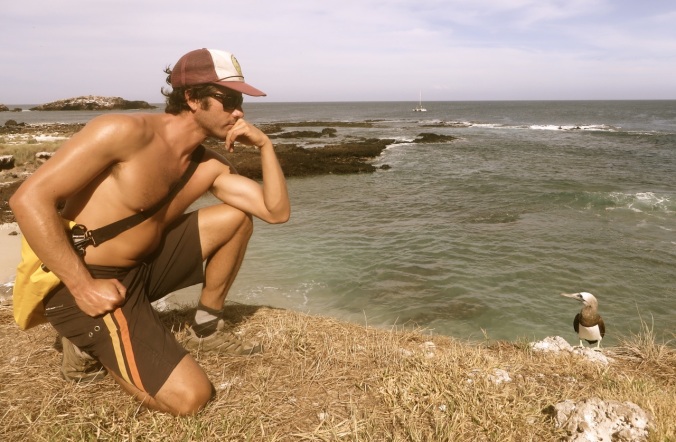 We eventually left because the odor of bird poop got the best of us. It reminded us of our anchorage at Mazatlan, which got potent wafts from the sewage treatment plant with the afternoon seabreeze — another reason we wanted to keep moving. 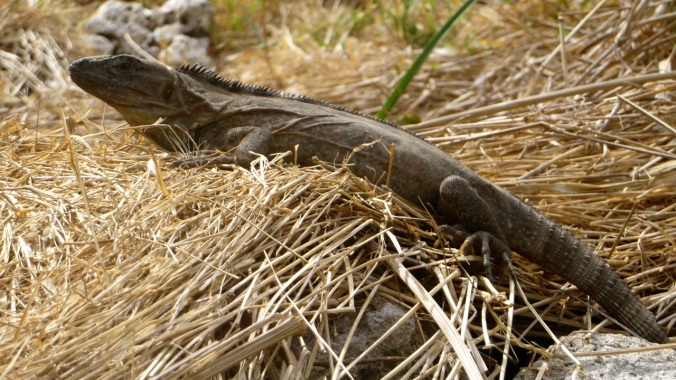 Aldebaran sailed south of Isla Isabel late that afternoon, heading back for the mainland and the waves of Chacala on the coast of Nayarit. The late-night, graveyard shifts went by smoothly — we had learned to download new podcasts in advance, like TED, This American Life, and audiobooks, and time simply flew by!

Dawn revealed strange shapes on the beach… “what are those things?” we wondered for some time.  “Trees!” someone cried. After a month and a half of cactus, we were finally in the land of trees, just around the corner from Puerto Vallarta.

Tropical lush-ness enveloped us. We thought about sitting on this beach for days, drinking coconut water, and relaxing in the spirit of mañana. But whispers of a mystical, forbidden island reached our ears… and we knew the Green Coconut Run must keep going. 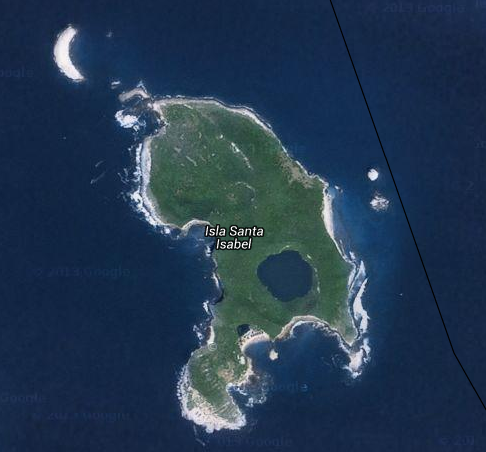 The geographically rich Isla Isabel — note the crater lake and the half-crater on the north side of the island, called Islote Pelon. For the Google Map link, click here and select “Isla Isabel” in the menu.

6 thoughts on “Scoring City Waves and Boobies (Blue ones): Mazatlan to Isla Isabel”