The first half of the 1800s rival missionaries- primarily Catholic and the Protestant London Missionary Society in lock step with French and British jockeying for political power-  increasingly arrived to convert the natives.   The Tahitian king Pomaré converted to Christianity, dramatically forbidding traditional dancing and traditions missionaries saw as inappropriate.

The Polynesians asked: why just celebrate one day, when we can celebrate the whole month?! Thus began the “Heiva” celebration, with dancing performances and competition during the whole month of July.

Every Friday and Saturday during July, there are village parties in cultural halls throughout the Marquesas. We attended one in Hakahau; it was a memorable night with a delicious dinner and incredible costumes and dancing . There were virtually no tourists besides us and our fellow cruiser friends from the Azores. Pickup trucks (the Polynesian car of choice) were lined up in the soccer field; kids ran around playing tag; old ladies sat gracefully with flowers in their hair. 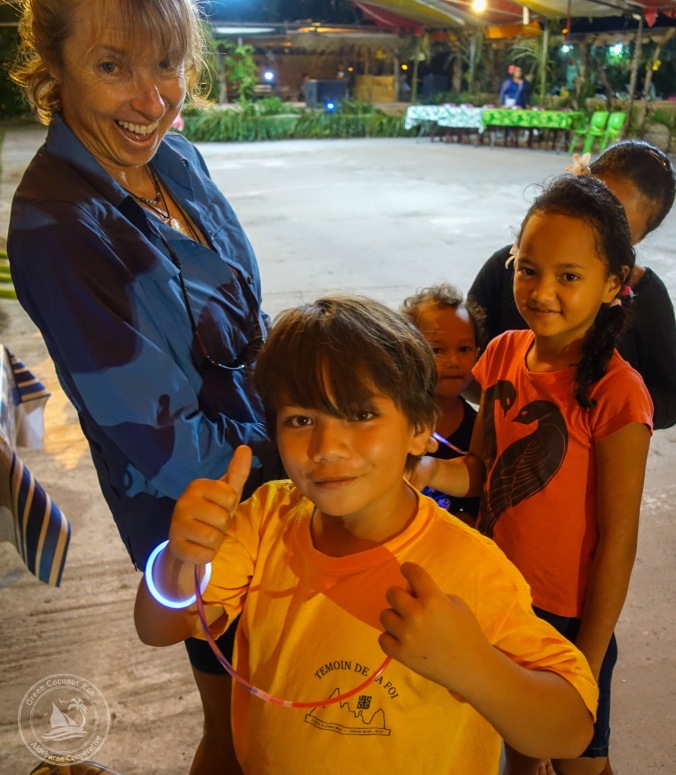 Three different dance troops performed. The energy is exceedingly powerful and tribal. Every dancer glistened in monoi oil and was costumed with leaves, bone carvings, and tapa dresses. The men re-enacted scenes of warriors in battles, or hunters searching for wild boar, chanting in raw rhythmic pulsation. Meanwhile the women offered a beautiful contrast with their haunting melodic voices and feminine gestures.

The dancers of Ua Pou are particularly famous for their “warrior mana”, and they held the audience captive in their spell, exploding with iconic male and female energies that reminded us of fairy tales.

The inter-village competition is taken seriously but the vibe is light hearted. The nature of the night was revealed when the troupe was slowly backing up, and one big chiseled man brushed up against 9 year old Asher, who sat entranced on the chair of a corner table. The muscled warrior was sweating head to toe, tatooed chest heaving for air, looking his menacing part; until he looked down at Asher and let out a huge smile, melting with mirth.

He then switched back into dancer role, and started moving with the drums in a powerful, timeless rhythm.