Doing laundry is a genuine battle in French Polynesia!

After our three week passage from Galapagos, we landed in Gambier, in dire need of clean clothes. Only one person in the entire town was willing to do our washing: an alcoholic, inhospitable German guy who refused to run his machine on the proper setting, despite charging us $30 ($10/load) for allowing us to use his machine.

The clothes were still dirty after going through the 20min quick-spin cycle he set, so Sabrina and Spencer were left scrubbing them in his shower. Irritating to say the least!

While anchored in storms, we began collecting extra buckets of rainwater to wash clothes (in a limited fashion) on the deck of Aldebaran. We longed for the days of Central America, where we happily paid $1/pound for perfectly folded and lovely-smelling laundry.

Two months after leaving Galapagos, we reached the civilized island of Hiva Oa. Laundry was available here, but the cost was nearly $20 per small load of laundry! In our desperate state, we almost paid $150 to wash everything we needed, but it was so absurd we refused.

Our solution: we actually left our clothing in another island. Well be back in 5 days! we told Tahina, a lovely lady in the tiny village of Hapatoni, population ~100. She said the cost would be $30 ($10/load) or, she offered, we could work out a trade if we had any perfumes or body lotions. Perfect!

For the bulkier items like our sheets, blankets, and towels we washed them by hand in Atuona. There is a good washing station with plenty of fresh water next to the dock. We spent an entire sunny day scrubbing and hanging clothes. plus the next two days nursing our sore forearms. I never knew this was so much work!

Honey, how much does it cost to have a washing machine for our boat? Such is the type of question we previously thought was ludicrous, but now appears wholly reasonable, should we spend any length of time here in French Polynesia. 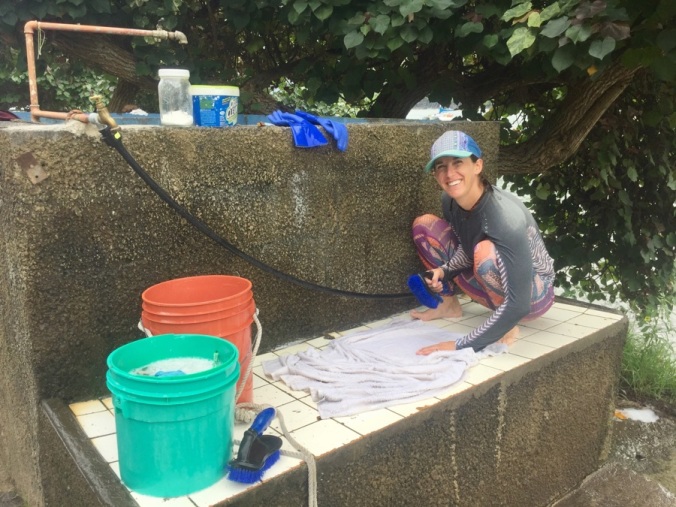