After our visit to the Galapagos, we were faced with the same decision as last year: where to park the boat for 4 months, while we went to California for work and family time?

We chose a small town in Ecuador’s coast called Bahia Caraquez, and we were very glad for it!

This was our route from March – September 2016, from Nicaragua to Panama, then Galapagos to mainland Ecuador.

We chose to moor our sailboat for 4 months in Bahia Caraquez, Ecuador, based on good reports on Noonsite (a crowd-sourced site for cruisers) and from our pal Johnny, who had sailed here many years ago.

It’s an ideal setup. You anchor just inside a very calm river, the weather is perfectly cool and mellow (there isn’t a hint of lightning or thunderstorms), the breeze is constant, a big lunch in town costs $3, and you can use wi-fi from your boat. What more could you ask??

Nice restaurant too! We arrived from Galapagos in time to celebrate Kelly’s birthday, one of our crew mates on that 10 day leg, along with Zach (and Sabrina on the right), shown here at Puerto Amistad with the sailboat mooring area behind.

Puerto Amistad is the town’s yachting home base. It is a restaurant with a dinghy dock that manages a dozen moorings, which cost $10/day. The anchoring or dinghy dock fee is $5/day, which also entitles you to wi-fi, a work area, and showers.

A nightly security guard keeps theft at bay — he drives a panga around the mooring field once every two hours shining a spotlight. The Coast Guard night watch is also present at a nearby dock. Anchoring outside this paid area with security is inviting very likely theft from the dozens of opportunistic fishermen driving by daily. 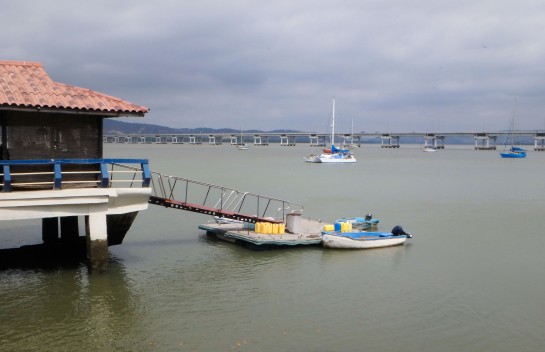 Puerto Amistad’s humble dinghy dock. They do have plans for expansion with sportfishing facilities, slips and a tidal grid for boat maintenance.

Cost of checking into the country is around $180, although it’s only about $30 cheaper if coming from another Ecuadorian port (e.g. Galapagos). Allegedly it’s way more expensive to check into Salinas and other ports requiring “agents”. The pilot service to bring you into the river (thru the very shallow 8-12ft channel, on high tide) is $35 one way.

Our all-time favorite mechanic in all of Latin America: Wacho ! This guy is da bomb. Here shown with our old Suzuki outboard, taken apart completely!

You can get anything fixed/fabricated in Bahia Caraquez. The town has a good array of mechanics (look no further than Wacho, if he’s available – just ask for him at Puerto Amistad), welders and seamstresses. Two hours by bus is Manta, which being the hub for the world’s largest tuna fishery, has a lot of technical marine know-how. There is no chandlery however, so don’t expect to purchase conventional marine gear without going to Guayaquil, 4 hours away.

Removing the port net on Aldebaran to make a mock-up for a brand new net. Our starboard net had blown out in the Sea of Cortez, and we’ve been sporting a black squid net on the starboard side ever since. We tried to get a new one made (unsuccessfully) in Huatulco, Mexico. This will be attempt #2 !

While we were gone, we paid Wacho the mechanic to paint the engine, fabricate some tubes, and make a new heat exchanger. This all went incredibly smoothly. I also had the local boat caretaker Ariosto paint the deck and cockpit, as well as some varnish work.  This had mixed results and supervision would be recommended.

Ultimately I realized I should have worked directly with the fiberglass/paint expert, known as Agapito. Note that none of these guys speak english, and arranging things through Puerto Amistad is slow like molasses.  However, they can arrange hull cleaning at about $1/ft.

While we were in California, Mr. Isuzu our 55hp diesel was painted and a new stainless steel tube (at top of engine) was replaced by Wacho. Good stuff!

The town of Bahia Caraquez got demolished by a large earthquake in April 2016 and 10 months later they are still deep in the re-building process. The tourism economy has suffered tremendously. We wrote about it on our blog, as we brought solar lights from Unite to Light to the tent communities that sprouted up, thanks to the international community. Major relief was needed for the tens of thousands who lost their homes to the earthquake.

Various murals in the streets 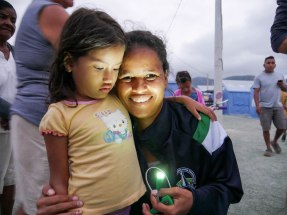 We felt good about hiring local guys and helping the economy a bit, particularly as we ended up doing a bunch of major things in preparation for our Pacific crossing to French Polynesia, as reported in our next blog…

Where next you’re wondering?  February we’re going to Galapagos; then in April going towards Pitcairn. Gotta get back to work, see you soon!

Panorama of Bahia Caraquez, Ecuador. A bridge runs across Rio Chone (right of frame) to San Vicente on the other side of the river.

Not working? Check out the album of photos.

Want to know anything in specific, or enjoyed reading the blog?  Holler in our comments section below.

Mooring the Boat: Our Experience in Nicaragua and Ecuador, Part 1

530 miles to go: the passage to Bahia Caraquez

One thought on “Mooring the Boat: our experience in Nicaragua and Ecuador, Part 2”