“Looks like I’m not a sailor!” Sasha said miserably, feeling nauseous a few hours into our 70 mile trip to Ahe. By the time we returned, it was a different story— she was proving her saltiness.

After four days of boatwork we decided to reward ourselves with a little adventure. On Sunday, a fresh 16 knot East wind carried us on a beam reach to Ahe atoll, where our dear friend Josh has a sustainable pearl farm (see kamokapearl.com).

Sailing behind Apataki atoll, we had smooth conditions. Then we entered the open ocean for 10 hours, with turbulent swells from two different angles sending the boat rolling. Aldebaran was charging forth happily; but Sasha’s efforts to clean some dishes in the galley sent her into downward spiral of nausea, that horrible symptom of seasickness.

Kimbo and I weren’t completely immune either; we felt a little queasy and out of it, looking at the horizon to re-center. Only when the seas subsided behind Ahe did we all start feeling better again.

Everyone gets seasick at some point. There is a process of adaptation the body undergoes when dealing with strange motions, whether they be from sailing, driving in the mountains, in an airplane, or amusement park. A little known fact is that even sailors going around-the-world get nauseous. We’ve talked to many families who have at least one member aboard that gets pretty ruffled while in open ocean, and finds ways to cope with it.

The most important thing is to develop an awareness of the body’s signals — I call them “red flags” — that indicate that something is off. At that point, heading immediately up to the deck and looking at the horizon; or sleeping; or taking medication (best if started before sailing begins); is usually the best course of action.

There are people who are hyper-sensitive to motion and get seasick even while at a dock. That’s tough. But Sasha was just exhibiting the normal reaction to being in somewhat rough seas, so I asked her not to be hard on herself. “I’m sorry I’m useless and can’t help!” She groaned. “Your job right now is to take care of your body,” I countered. The best thing you can do, if you’re seasick, is try not to get in the way and be a debbie-downer.

However— Sasha’s woes did not end when we arrived at our mooring. Her fairly unusual response was that upon arrival on land, she got land-sick! This does occur mildly with some people, but for most being on land helps “reset” their system. But Sasha got more ill, tired, and achy. This brought her spirits way down, as she started to question her ability to sail around the Tuamotus with us, as planned. Feelings of guilt, self-doubt, and anxiety make it even more tough to help the body adapt to this challenging situation. After sleeping off a splitting headache under the shade of trees, she started to feel better. We took her back to the boat, which unfortunately, was in a rough uncomfortable mooring. Not a great solution for her stay. What to do??

We were tied up “Tuamotu-style” behind a coral bommie as our mooring. Perched ontop was a shack that the Kamoka Pearl Farm used to use for grafting of oyster shells. So we installed Sasha in the shack, which is rock steady, with just the lightest vibration from the flow of the sea on the pilings. Her spirits improved, seeing that she could stay comfortable while right next to the boat. She even volunteered to start hand-sewing our jib sail. What a trooper!

The shack became the beloved “Chateau”. The breeze ran through the Chateau keeping it cool, and being 1/4 mile offshore, there wasn’t a hint of mosquitoes or bugs. Around the whole coral bommie were tons of beautiful parrot fish and jacks to swim with and cool off. So despite the run-down appearance, for our needs, it was as lovely as any $1000/night over-the-water bungalow in Bora Bora. 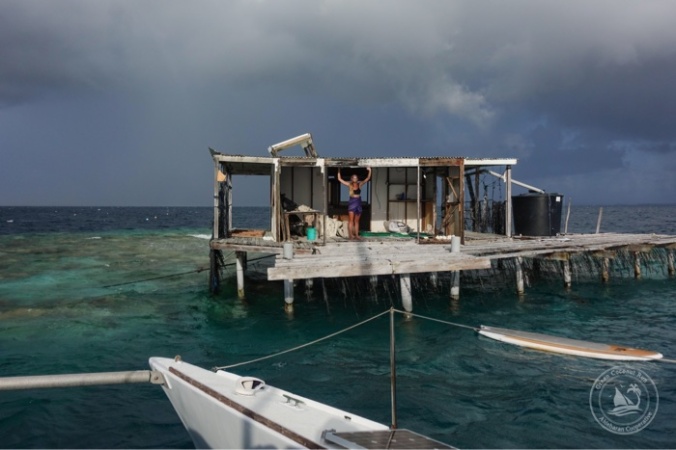 5 thoughts on “The Mystery of Seasickness, part 1”