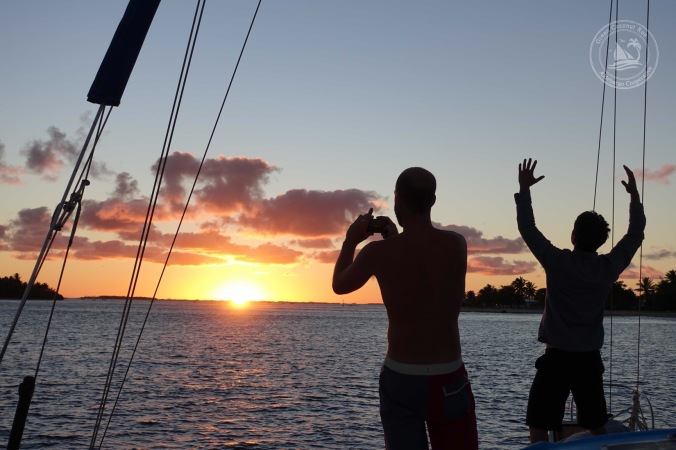 Johnny and Alex were sunburnt, sweaty, and tired of the outboard’s whine; and still no fish to show for the long day’s efforts of trolling the pass for tuna. They were getting a little… “fish-trated”.

Folks in the village of Faaite told us to meet Bruno. Turns out he is a champion spearfisherman from Tahiti who moved here two years ago. On their first outing, Bruno took the fellas to coral bommies inside the lagoon. Michael and Ben speared several beautiful groupers, without much problem from the blacktip sharks patrolling the area.

Chef Boy MC hunting for grouper in the lagoon.

The real prize, however, was in the pass: Bruno took them to his favorite spot to hunt for the powerful dog-tooth tuna. The tide was perfect and they got lucky: there were no dangerous gray reef sharks (raira), and big tuna were spotted; although the fish were coy and kept their distance at first. 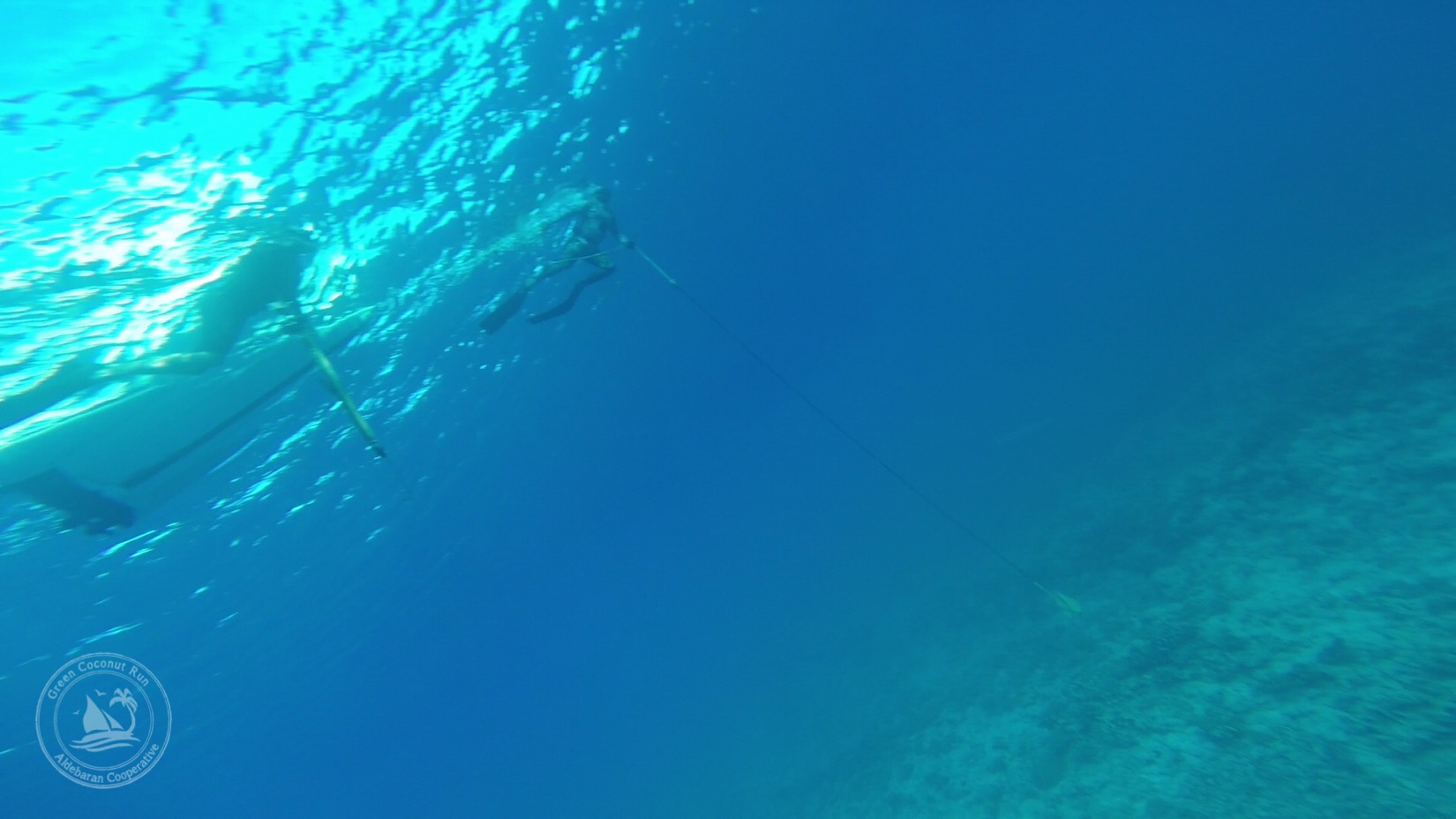 Underwater perspective of the anchored dinghy and the crew taking turns spearfishing. In the tuamotos the rule is to spearfish with a buddy always to help disable the fish with a second shot (if its big) and to help haul in the float line that’s attached to the speargun. The spearfisherman moves away from the wounded fish in case sharks come to chase it down.

Then suddenly Alex saw a big tuna split from the school and circle back. He dove down and was incredulous: the tuna had approached and turned sideways, as if “presenting” itself for the hunter. Alex took a long shot… it hit the target!! Using his experience, Bruno had seen the situation evolve and was diving close behind Alex; within a few seconds he took a secondary shot to make sure the fish was quickly killed. This was important because the wounded fish would otherwise run and fight, attracting sharks from far and wide.

now firmly embedded in the tuna 30 feet deep, were attached to the dinghy, which was anchored in the pass. Ben jumped aboard and hauled up on the lines with Johnny’s help, getting tangled in the chaos, but nevertheless with the team’s efforts the fish was landed within 25 seconds. Huge success!!! 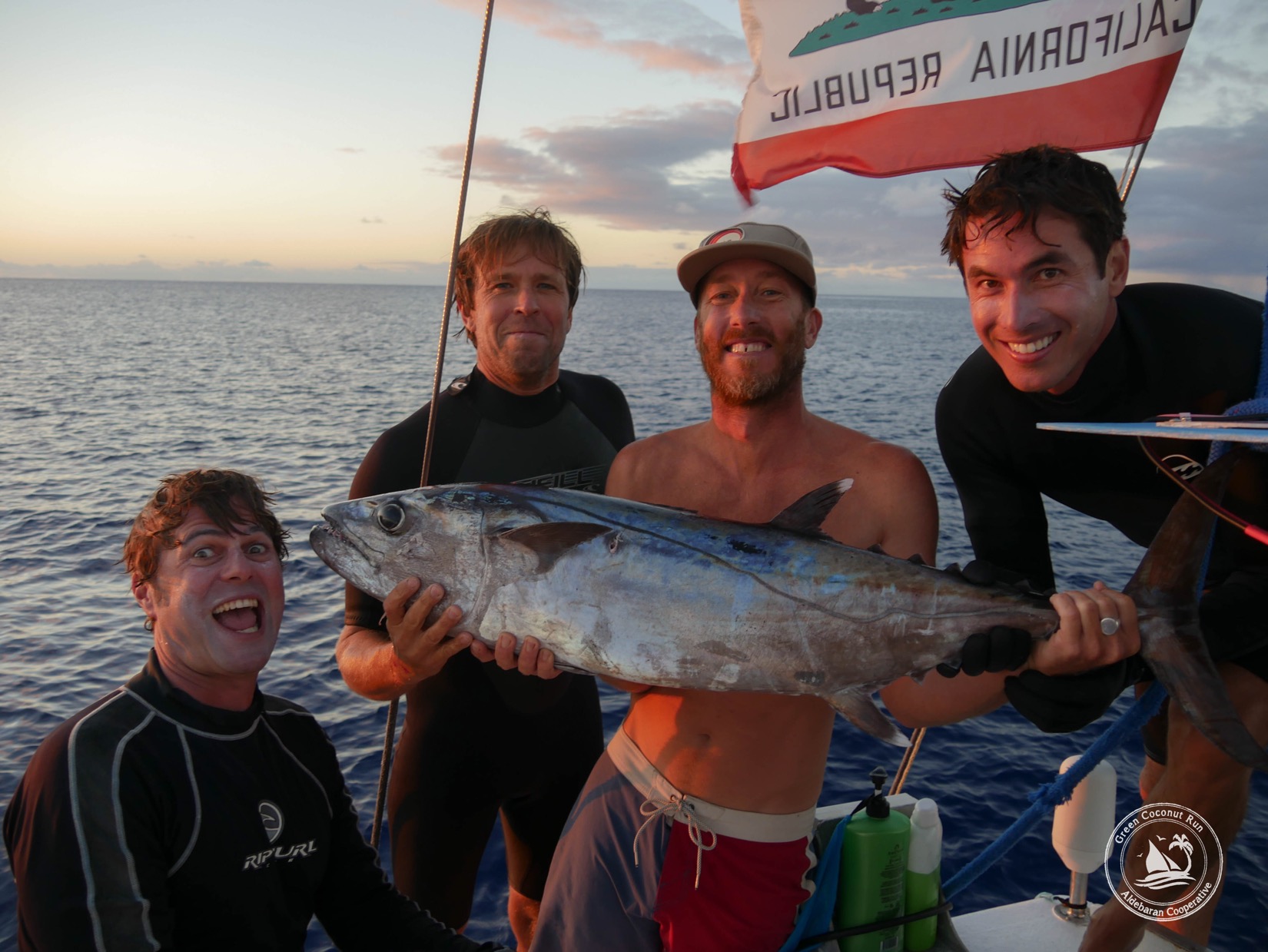 “You got very lucky, no sharks!” said Bruno.  Yes, we got lucky… did I mention Bruno was a restaurant chef and filleted the fish in record time, with sashimi being cut before sunset?

Now we dined with Bruno, who had never visited a cruising sailboat, or taken foreigners spearfishing for that matter… for the next few days we ate like kings and queens on sushi, grilled fish, seared tuna salads, and fish cakes for days…

Bruno and Alex with the prize dog-tooth tuna

Thanks to Bruno for helping to re-stock our fridge and breaking our dry spell!!