We got a little too greedy…  It was hard to leave our good friends Leon & Soraya in Makemo, so we stayed a little too long… and ended up taking a little storm on the chin. 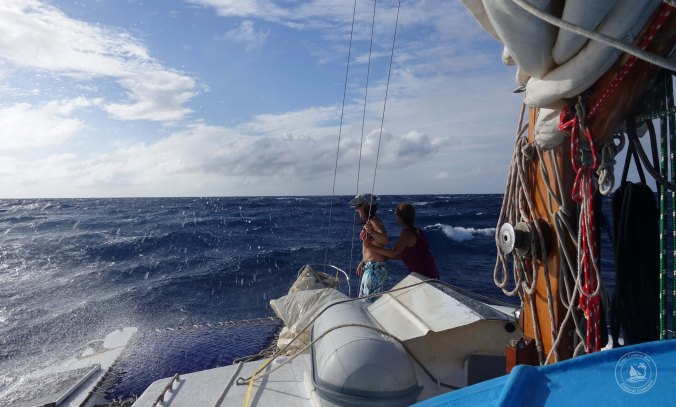 Diyana and Melanie ride the bucking bronco on our exit from Makemo’s pass. We quickly discovered that the combination of outflowing current and head winds creates nasty seas in any atoll pass!

The delightful ENE wind that we enjoyed in Makemo turned to North in anticipation of a passing low pressure. We could expect the winds to turn to West then South in the next few days (before clocking back to the ESE tradewinds) . We needed to make the most of the north winds to run towards Tahanea, an uninhabited atoll to the south-west, famous for its incredible marine life.

However, our forecast turned out to be about 18 hours behind “reality”. 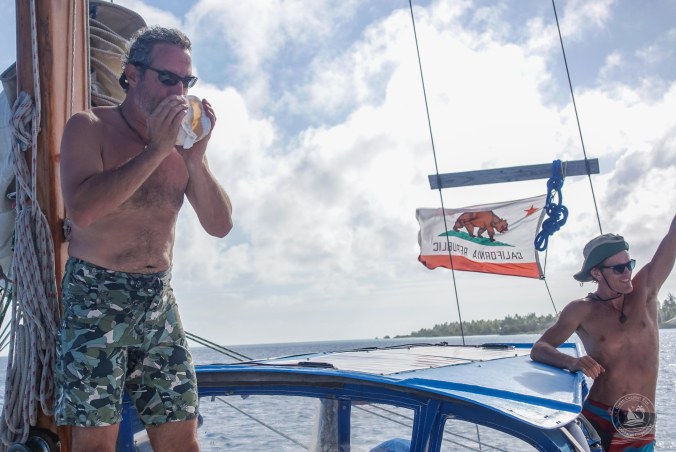 The important ritual of blowing the conch on departure from Makemo.

We sailed around the eastern coast of Makemo and had a fantastic full-moon sail into the wee hours of the night. Diyana and Melanie took the 8pm to midnight shift, and Coronel rode it till 3:30am. All was calm.

Outside Makemo’s pass, we saw a Fish Aggregating Device (FAD) which is a buoy system typically anchored to the ocean floor which attracts schools of fish. Sabrina eagerly dropped in a fishing line as we sailed at 7knots, and within minutes the line was zinging! However, the line snapped cleanly. Our drag was relatively loose so the tension on the line wasn’t great — the failure was most likely caused by a large shark catching our catch!

Then at 4am, when Sabrina took over the watch, the 15 knot north wind suddenly clocked around to the west at 30 knots. Horizontal rain began streaming down. I jumped into my sailing harness to help Sabrina.

We always clip onto our jacklines at night with tethers connecting us to the boat. In the rough seas we dropped sail and kept trying to push towards our destination in the hopes that the wind would turn favorable again. But we were getting heavily battered so we tacked and headed to the lee side of an atoll to take shelter.

The small storm was short-lived, and once it passed the seas were lumpy but wind was calm. We motored the remaining 45 miles to Tahanea atoll, weaving between various small atolls on the way. 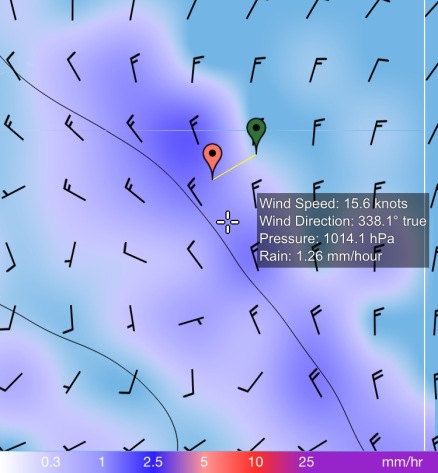 Our weather forecasting by satellite. The rain band (indicated in blue-purple) moved in 18 hours earlier than expected in previous forecasts, which is a good lesson: low pressures can move erratically and speed up suddenly. Also the forecasted NW wind with the forecast was in actual fact a straight West wind, which also teaches us about the variability of wind in these conditions.