“Leon, nous sommes arrivés!” Sabrina told our friend enthusiastically over the phone, advising that we had arrived. “Magnifique!” Leon responded, and told us how to find his house — distinctly salmon colored and hanging over the water’s edge 1/2 mile after the pass. 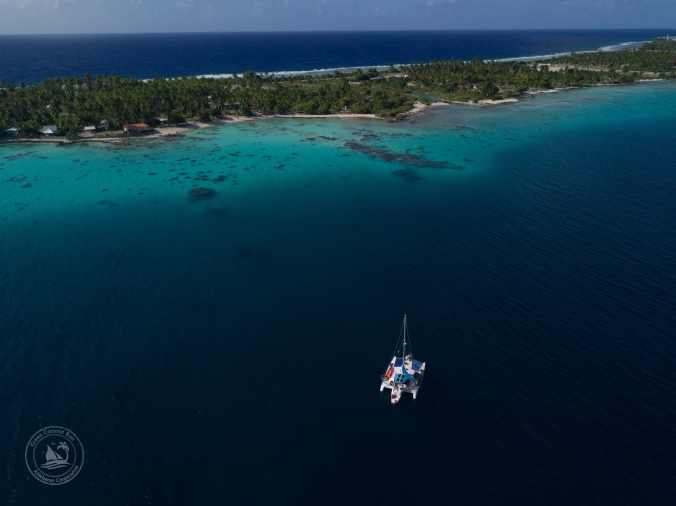 Aldebaran anchored in Makemo. Note how narrow the land is: there is no potable groundwater, so everyone must capture rainwater and store in tanks.

How often do we arrive in a new island after 500 miles of ocean crossing and have a local expecting us with cold beer and snacks?? The answer is never. Our connection with Leon came from a surprising place. 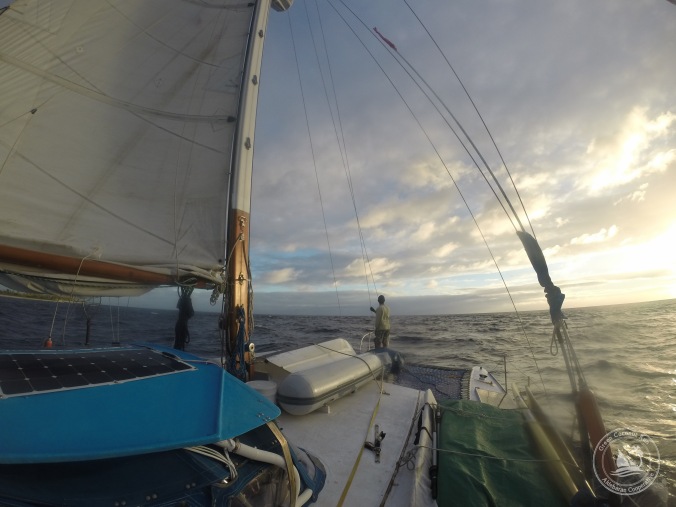 In the Hiva Oa Boatyard, in the southern Marquesas, we were repairing Aldebaran’s fiberglass. More appropriately, one could describe it as chemical warfare deep in the tropical trenches. Into this toxic carnage of sanding, fiberglassing, and painting, a stout smiling man waltzed. “Je m’appelle Leon!” He said, and announced he wanted to learn boat repair.

Leon carried an iPad and took pictures and notes of everything we did. He was doing a month long internship at the Hiva Oa boatyard to take new skills back to his home, Makemo, in the Tuamotus. We were more than happy to take him under our wing (literally) and teach him a thing or two about boat repair.

“Let’s have a beer in my yard,” says Leon. Or perhaps we should call it their swimming pool. Here’s Leon with Soraya, and Aldebaran anchored in the background.

Leon spent time fairing Aldebaran with thickened epoxy, and laying the 13×4 ft roll of dripping, over-heating fiberglass that we had to glue overhead onto a vast swath of the boat’s damaged wing. Needless to say, we bonded over these good times! In due time, he learned we were heading to Tuamotos for Sabrina’s birthday. “Well, you should come to Makemo and I will make you a great birthday cake!” Don’t have to offer twice, we told him!

Leon is a professor of mechanics at the college in Makemo, which is the administrative center for the neighboring 8 atolls. When kids are 14 yrs old, they move to Makemo to finish their schooling. Leon trains them to become mechanics (fixing engines etc) but now wanted to bring his students the skills of fiberglass repair. He is originally from Tahiti but met his wife Soraya here in Makemo and stayed. 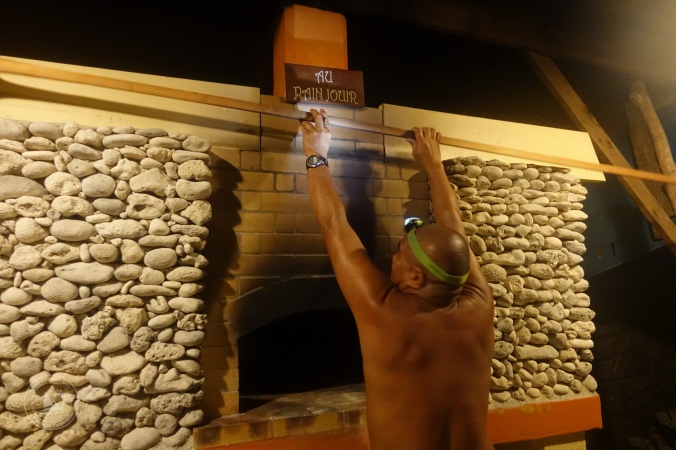 There is a stereotype that Polynesians are lazy. After all the tropical heat can do that! But all we’ve seen is a surprising productive energy: gardens are perfectly manicured; copra is attended to at early hours all week; and people are eager to learn new skills.

At the top of this pyramid stands Leon – he is a prolific “rennaiscance man” of atoll living. He sings with his ukelele, built an impressive solar system for his home, constructed a stunning wood fire pizza oven from coral, then learnt how to make pizza from the internet, and bakes the most delicious french bread and mouth watering birthday cake!! Oh, and did I mention he also cultivates honey from his carefully tended beehives? 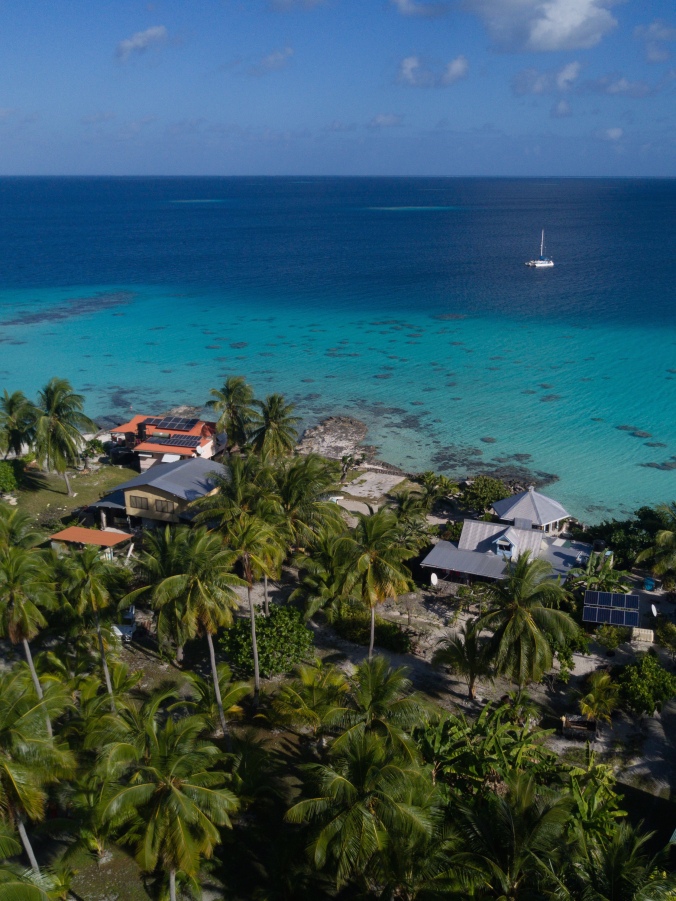 Note the solar arrays on Leon’s property and his family’s next door.

We timed the slack tide well and Aldebaran entered Makemo’s pass without a hitch. We were very fortunate to have light NE winds which were perfect for anchoring in front of Leon & Soraya’s house. (Instead of the strong SE winds from the last few days, which makes the Makemo anchorages rather choppy). The crew launched the Lambor-dinghy and we motored into the perfect sand beach next to his idyllic house, with Leon’s big smile greeting us. Let the party begin!

3 thoughts on “Makemo Atoll, home of Leon and Soraya”