Here are some of our memories of sailing to the Tuamotos archipelago. They are also known as the mythical land (er… ocean expanse) of 77 huge atolls with intensely blue lagoons.

The Coronel decided that the term graveyard shift is obsolete. It should now be called the “gravy” shift. In his words, “the full moon was playing with the clouds like a wild light show across the water, I was THIS close to waking y’all up to see it.” The Gravy shift is Midnight to 3am.

Sushi party underway! We were eating fresh  tuna purchased during our early morning provisioning in Marquesas. “We had seen this in the blog so it’s uncanny to now be part of it!!” said Diyana in between bites of tender ahi.

Flying fish were everywhere. Dobbs was fascinated to no end.

The wind never eased from 16-20kts at an apparent wind of 60 turning to 80 degrees, so it was a rough but fast ride! We got to Taenga atoll near Makemo in just three nights.

Coronel had recently finished his bareboat skipper certification with the Santa Barbara sailing center (congrats!!!) so he was geeking out hard on everything: the difference between heading, bearing, and course directions; navigational planning (our arrival estimates to ensure we’d reach landfall in time for safe pass navigation); and the nature of time & space.

Coronel described the motion underway as being inside the womb of a donkey with his unborn brother kichking him, and then momma donkey rolls down a hill tumbling over rocks as they get tossed about. I thought this was a little much but I enjoyed the visuals.

Our other passage-making crew (Deena, Michael P, Spence, Dave, Ben, Lauren) might want to chime in on what they thought passage-making motion is like! I know some of you came up with good visuals too.
The ladies didn’t seem to have a problem sleeping though and clocked in some serious hours horizontally (nausea at sea can do that to people). 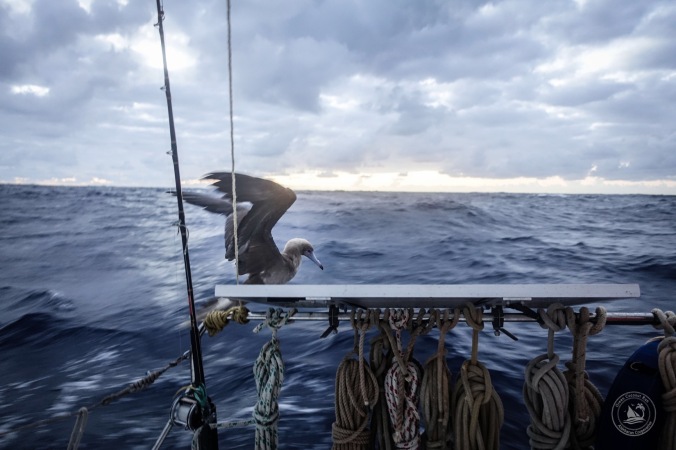 Boobies took to resting on our solar panel. I warned the ladies they would poop all over the panels. They concurred, “we’ll clean the poop, let them rest, plus they are so cute!” The following morning the boobies flew off to hunt their daily catch… and the ladies spent the morning cleaning the decks of poop.

Any other impressions from the passage? Matt, Diyana, and Melanie pls chime in !

We love to hear from you, and anyone else who might have questions about passage-making.

One thought on “Memories: underway to Tuamotos”