In case you’re wondering what we’re reading & would like to learn more about these places:

Kon Tiki: famous book by Thor Heyerdahl about taking a raft from Peru to South Pacific in attempt to prove Polynesians arrived from the east, instead of the west, which is the scientific consensus to date. Aldebaran feels like a big sailing raft itself, so we identify with his voyage! Both the old documentary and modern feature film are excellent (both called Kon Tiki).

Fatu Hiva: a less famous book by Thor Heyerdahl about his attempt to “go back to Nature” and live with his wife for a year among traditional people in the island of Fatu Hiva, back in the 1930s. He endured fascinating trials and tribulations, from mosquito infestations, Catholic priests condemning them, tropical ulcers that nearly cost them limbs, and power dynamics with the local population.

Tahiti Moon Guide: good for background information and sight-seeing, along with archeological and cultural insights about the whole of French Polynesia.

Collapse: by Jared Diamond, touching on archeological studies to understand what causes civilizations to fall apart; we read out loud the section on Pitcairn, Henderson, and Mangareva. It also taught us that our route between Gambier and Marquesas, via Tuamotos, was a traditional trade route around 1000 C.E. during the era of Polynesian expansion.

Trouble in Paradise: Vanity Fair’s 2007 article about the child sex investigation in Pitcairn that caused a stir around the world, shedding light on South Pacific cultural differences and British territorial responsibilities.

(Thanks to Bob Beadle for sending us the previous two e-books via satellite connection, in multiple parts so that we could download them slowly!)

Any book recommendations for us related to the South Pacific?

Photo: the inside cover of Thor Heyerdahl’s book, Fatu Hiva. Thanks to Annelise for gifting it to us, when she visited us in the Galapagos in March! 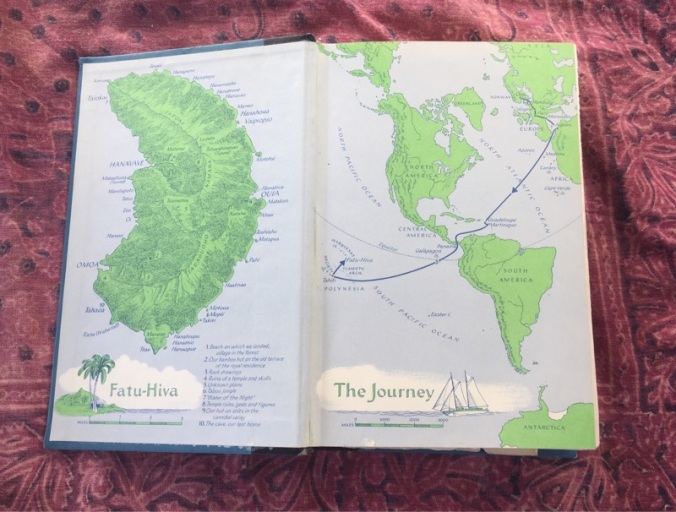 One thought on “What we’ve been reading…”