Our welcome party in Reao took us in a car to the other breakwater. A tractor towing an aluminum boat followed us through the streets, along with a growing entourage.

Reao doesn’t receive many visitors due to their remoteness and poor anchorage. They told us we are the first sailboat to arrive this year. The excitement on shore was palpable. More people showed up at the Southern Breakwater to introduce themselves to us; it felt like we were meeting the entire town. Their aluminum skiff was lowered into the water then zoomed out towards Aldebaran, through a “keyhole” in the reef. The keyhole looked like a channel from our vantage point, but waves also broke across it every few minutes.

After returning from Aldebaran, the skipper timed the sets and expertly maneuvered through the narrow 20 foot channel. It returned with only Deena in tow.

“Were you able to anchor?” I radioed to Kristian.

“Yup, I put out the delta anchor in 100 feet of water,” Kristian said. Our 33lb delta anchor is half the weight of our primary 66lb Bruce anchor, with a long run of line (instead of all-chain) which makes it better for deeper anchorages. We usually anchor in 20 to 50 feet, so this was a lot to ask for our hook. Kristian continued: “It seems to be holding well, but it’s precarious. I’ll stay on the boat overnight – you guys explore!”

By now the sun was starting to set. After many hearty introductions – and some discussion about whether Pierre gave us “permission” to stay on the island, we were then encouraged to go… walk.

Ahhh… walk where? I was also unclear what ‘staying on the island’ meant. Was this permission to walk around? Or permission to stay with someone?

Keeping in mind the setting sun, and the potentially long paddle back to Aldebaran, we went walking. A growing group of kids followed paces behind us. I tried to ask our entourage where we should go, but they were bashful and shrugged their shoulders as if they didn’t know. “What about your lagoon? Can we go visit that?” They nodded yes and pointed to a road ahead. 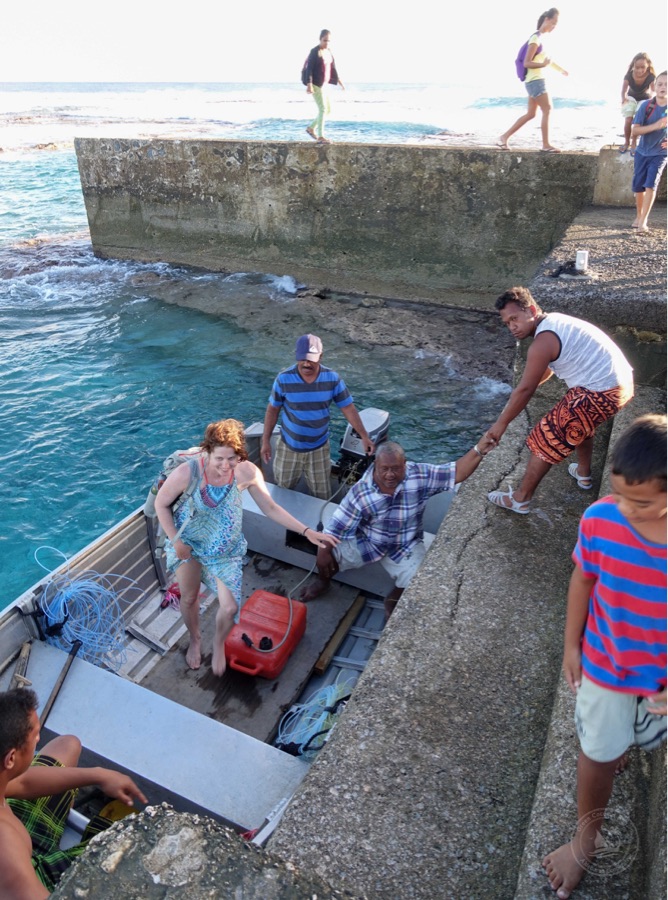 One thought on “Arriving in Reao, part deux”