The rocking at Bounty Bay anchorage was so intense that we woke up at 2am with the violent motion and couldn’t sleep. In comparison, sleeping under way at sea was a delight! Yet, our visit to Pitcairn’s “Adamstown” the next day made the night’s hardships more than worth it.

The town is named after John “Adams”, who was the sole male survivor of the civil war between the English mutineers from the HMS Bounty, and the Tahitian men that were brought as pseudo slaves. The colony blossomed under Adams’ leadership and he is a founding hero, in equal measure to the charismatic mutineer Fletcher Christian, whose surname is still held by about half the town’s residents.

After the poor night of sleep, we struggled to put the 15hp Suzuki outboard on the Lambordinghy, our 10ft inflatable skiff. The awful side swiping of the swells made this operation sketchy as heck; but we successfully installed the outboard, and motored to the inside of the protected breakwater. A white sign was proudly displayed above their launch ramp: “Welcome to Pitcairn”.

A group of five locals were there to greet us: the immigration, customs, police, port, and tourism officials. Several had bare feet which contrasted wonderfully with their official attires; they beamed with smiles and put beaded necklaces around our necks – their version of a Hawaiian lei – as we clambered from the skiff onto dry land for the first time in three weeks.

Our arrival — the vexing challenge of the anchorage and the locals’ buoyant welcome — was emblematic of the Pitcairn Experience. The exceptional difficulty of access is at the heart of why this community is so special. Because of the formidable effort needed to get here, the locals are by default self-reliant, individualistic, and genuinely appreciative of your presence.

Case in point, Aldebaran is just sailboat #12 to visit this year (2017); and the summer season of fair weather is nearly over, until November.

When we finally got our land legs under us and stopped wobbling, we climbed up the hill to “lunch at Darlene’s”. We were served a huge spread of home cooked casseroles and pasta, followed by an array of desserts. Melva, the tourism coordinator, had arranged for the museum to open for us at 1:30pm; but the lunch feast was running late.

“Oh don’t yous worry,” said our hostess Darlene in her Kiwi-islander accent. “I’ll ring the museum lady. She’s my mum.” She rung her mother on channel 16 of the VHF radio, which is a public channel that everyone monitors in the island.

We then relaxed into a cup of coffee and heard stories of their long boat adventures to the nearby atoll of Oeno for summer vacation, and to Henderson Island to harvest timber for construction and wood carvings.

This was an example of Pitcairn Time. There might be a certain English precision, where everyone is aware of time commitments. Yet, there is also total fluidity, where any change is just a VHF radio call away, and any change is ok.

We walked outside with bellies full and looked at the hillside. Over here was a garden of peppers, Hibiscus flowers, papaya, and pineapples. Over there were pine trees towering on the cliff edge. Banyan trees stood proud; their strings of roots looked like giant Rastafarian locks.

The landscape showed evidence of two centuries of efficient self-reliance. Manicured gardens merged into wild orchards of bananas and breadfruit trees; which gradually dissolved into the mossy jungle.

The path running past the buildings in Adamstown feels like an unassuming Fairytale. We see iron sheds for garden tools, the red and white Post Office building, people’s homes; all tidy and clean, even though the rusty materials and verdant trees seem to burst with life and conspire toward chaos.

Adamstown is like a well trimmed beard: people have given it their complete attention. The best reason for this is their industriousness; but it is also because the residents are always here…. Since it is very hard to leave, just as it was hard for us to arrive.

The winds will dictate when we leave too. We are short on diesel and will need a favorable breeze to sail to Gambier. A rain front is now supposed to move in and clear by tomorrow or May 3rd – we’ll exploring as much as possible in the meantime. 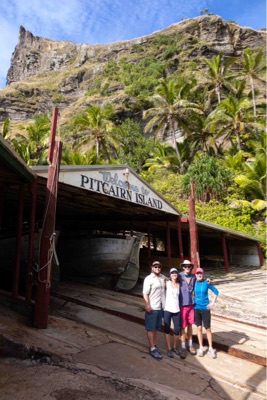 5 thoughts on “A Taste of Adamstown”