It’s 4pm and you know what that means? It’s tea time! It has been our daily ritual on the passage, and has helped keep everyone sane. The motivator for tea time was, of course, our British crew member Michael.

Prior to committing to the long Pacific Passage, Michael had one pressing question. “Do you have a way to boil water for tea?” he asked over Skype.

“Of course” I chuckled at the silliness of this question.

“Well, have you heard of powdered milk?”

“Powdered milk!? My mother would roll in her grave if she knew!”

I could see this was an issue, so I suggested, “No problem, we can make room for boxed milk.”

A week before flying out, Michael was still asking about said ‘boxed milk’.

“What does it taste like? Will it be okay with fine english tea?”

For a man who was more concerned with the quality of his tea than the safety of the boat, I was surprised to discover Michael might not have enough tea to get him through the voyage.

He had brought 80 tea bags for the month. As a proper Englishman who uses 2 tea bags per cup, for both morning & afternoon tea, he was entertaining a daily consumption rate of 4 tea bags; which meant a total of 120 tea bags needed for the month with us… he would be 40 tea bags short!

An intervention was needed- lest he experience withdrawals later in the voyage. With some remorse, Michael reduced his tea bag consumption to one bag per cup. Disaster averted.

Everyday at 4pm we stop for tea time. We might be working on projects, cooking, or writing, but we stop and come together to chat and “have a cuppa”.

Unlike meal times, which involve the work of cooking and cleaning, tea time is more simple so promotes fresh creativity. We might play Mexican train dominos (fun!). Or share something – Spencer will teach us new knots; Kristian will read a satellite report from a fellow cruiser; Sabrina will share comments that people post to the blog (yay!); and Michael might read a chapter of his novel about Pitcairn (that’s right, he didn’t just write a poem!)

Tea time is a lovely ritual which on a passage-making boat is especially delightful. Without these consistent breaks to come together and laugh, all the days would blur and we’d start going cuckoo.

Ps. Favorite anecdotes of Michael and his tea consuming prowess can be shared below! For example we heard he stopped for tea even while running the Boston marathon? The guy is committed! 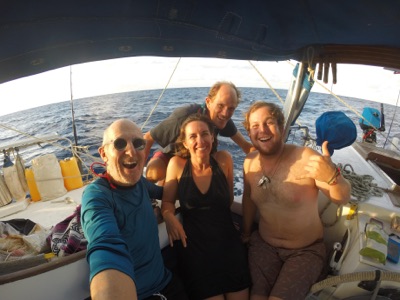