You probably haven’t heard of it — but how does one visit (and you should) the spectacular waterfalls and striking lushness of the Rincon la Vieja national park, in the far north of Costa Rica?

The Nicoya Peninsula’s famous beach towns like Tamarindo, Santa Teresa, and Montezuma are known to the ocean lovers – but at the northern end of the peninsula is a ring of volcanos with thick jungle. After all, that is what makes Costa Rica famous: the incredible diversity of its habitats.

Rincon La Vieja is a volcanic national park near the city of Liberia. It is 1hr from Playa de Coco where we left Aldebaran.

For the captain’s 34th birth in late March, we wanted to spend two nights in the forest. Never mind the ocean, we spend plenty of time bobbing around. Let’s go inland!

After a hiatus from sailing, birthday boy, Captain Kristian, and first Mate Sabrina were once again steering the ship south from Nicaragua, where Aldebaran had spent four months resting. They were joined by cousin Sophie and Tim, from Anchorage, Alaska, whose goal was to sail to Panama onboard Aldebaran, while attempting not to melt down from the tropical heat. Cousin Mark, 22 years old, was in between jobs and joined the family cruise. 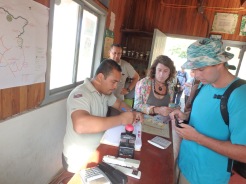 Checking into the National Park: pay up $15 each

Cousin Sophie stoked with the fresh water after the long hike.

Kristian’s old time buddy Adam joined along with wife Kendra, and eight year old son Asher. They came aboard Aldebaran in San Juan del Sur, and cruised the idyllic bays and islands of Santa Rosa National Park during five blissful days (it was their first boating experience as a family — read about their experience here and my description of the unique Santa Rosa park here). They were leaving us after this excursion. In their place, joining Aldebaran for the next week were Matt & Diana, who drove up from San Jose and met the boat crew in Liberia. All 10 of us (!) spent two nights in the mountains.

It was late March, and we were heading into Rincon la Vieja National park, near Liberia, Costa Rica. Incredibly, this provincial city has an international airport and is only 30 minutes from a wonderful cruising sailboat destination: Playas del Coco. March is at the tail end of the dry season in the Pacific coast of Central America (which lasts from November to May) — so it was warm and dry. 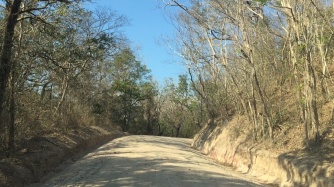 Payless Rent-a-car armed us with 3 identical cars: a toy-Jeep.  Careful, every robber in the nation knows it is a tourist rental, and they love to break in, as happened to poor Matt & Diana!  Four people max out each vehicle, and there is no room for baggage, but we piled our groceries and skidded through the chalky dirt roads heading uphill from Liberia. 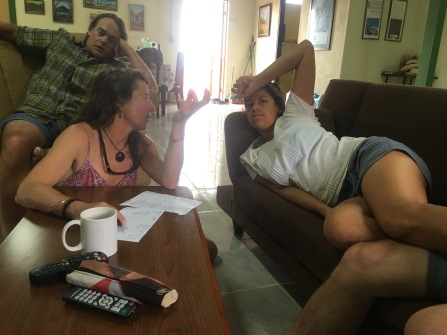 When it’s hot, the pool beckoned 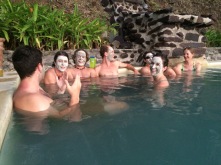 10 people in one place is a tricky thing to accommodate —  particularly since it was a week away from Easter, which is extremely popular in Catholic countries throughout Latin America. Thanks to Adam’s wisdom (being a family man has instilled planning tendencies) we booked the place months in advance, which we found on Airbnb, called “Vida Aventura Nature Park”. It had 4 sleeping rooms and a central living room with fold-out couch, plus kitchen, for $25/night/person.  Excellent value! Especially after seeing how pricey everything else is. We opted for the optional $10/person dinner, but made our own breakfast/lunch with groceries. 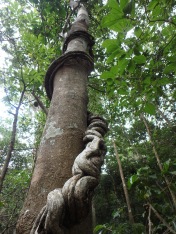 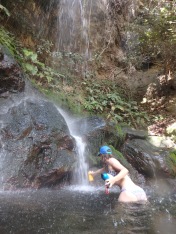 Refilling water bottles at the Escondida 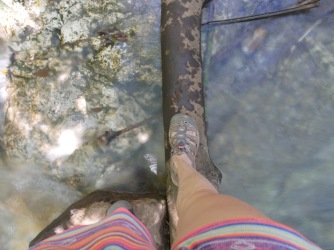 Step 3. Hike the National Park for a day.

Get yer’ boots ready for 5 hours of hiking. Staying at Vida Aventura meant we could get an early start, as the park’s entrance is only 20 minutes away (in comparison to 1.5hrs from Liberia, where most accommodations are). The famous waterfall called Catarata Cangrejo is a 90 minute walk from the park entrance, and is heavily visited by tour groups and screaming high school kids from USA. Another 90 minutes uphill into hot territory is Catarata Escondida , which is frequented only by fearless Danish backpackers and others who don’t have a well developed sense of pain.  They are rewarded with fields oddly reminiscent of oak trees in California; alongside swarms of friendly dragon flies; and a hike through a mysterious canyon to the “hidden” waterfall.

“Last thing I wanna do is soak in hot springs!” we think during the heat of the day, but once the sun drops the air gets a refreshing nip at this altitude. Vida Aventura had its own warm spring and pool so we just relished in our private area; that being said, lovely hot spring resorts are developed in the vicinity, which Matt & Diana visited for $10 a pop, complete with the regional favorite: mud bathing. Dance party was in effect in the living room afterwards with “Dark and Stormy” drinks going around.

Relaxing at Sunset at the pools

This area is popping with creatures. It never gets boring — watching red Macaws flying in formation, or white-faced Monkeys fighting over bananas. What’s that, you want some more epic Waterfalls?  On your way down to Liberia swing by the majestic Catarata de Llanos del Cortés where a famous booty shot was once taken, which was later turned into a famous fridge magnet. Be careful in the rainy season though — you might get stuck in the mud.

Historical Note: Erika, Bret & Jessica were witness to our near breakdown in the mud when we (attempted to) visit that waterfall five months prior. You may be wondering, why did we come back to this same place, months later?  Well, that is for another story, featuring our nemesis, Lightning.

Return cars, head back to the good ship Aldebaran. Shucks, I hope everything is still there, nothing stolen!  I paid $15 for a guard to spend the night aboard, but Costa Ricans are infamous for petty theft. Luckily, Aldebaran has all her prized possessions with her.  Now, we were ready to provision the boat with delicious and overpriced groceries, and start the 7 day trip south down the Nicoya Peninsula towards Bahia Herradura, in central Costa Rica. 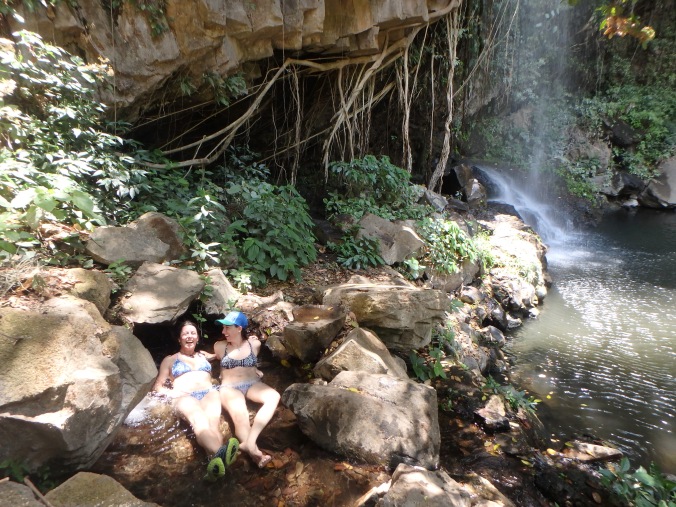