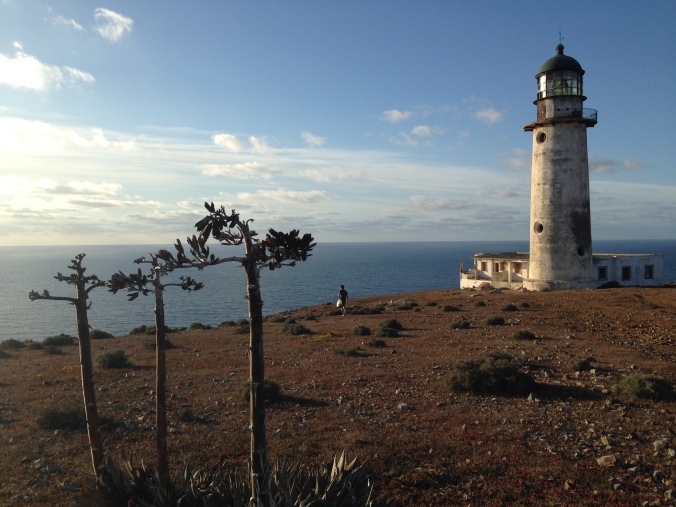 A lighthouse flashed in the pre-dawn hour. “Land ho!”

The two islands of San Benito took shape, with huge Cedros Island in the background. We were offshore in Central Baja, near a cluster of islands jutting out of the Vizcaino peninsula, after 2 nights and 230nm of sailing — our longest passage yet. 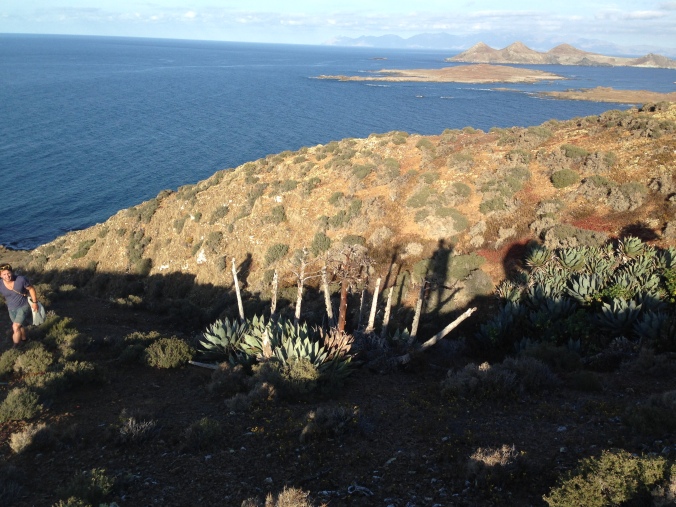 Originally we had planned on diving along the Baja coast, but 20nm south of Ensenada we registered 53 degrees Fahrenheit on our sonar, at Puerto Santo Thomas.  “It is freezing!!!” said Michael after he free dove in the picturesque fishing bay. He speared two rockfish in the kelp forest. “I’m ready to go south!”

Say no more — we hoisted anchor that same day at 6pm, pulled out the harnesses, rigged up the jacklines to clip  along the length of the boat, red lights for night vision, and set 4 “watches” for 3 hours each. The wind blew 12knots from the NW and Aldebaran galloped on a broad reach due South at 8 knots with the big blue reacher headsail and mainsail both at full throttle.

We pointed towards the rising constellation of Scorpio as we sailed into the night… south, ever to the south.  “Geez, we are out here!” smiled Sabrina, looking into the 360 degree darkness, pulsating with white caps in all directions. The glowing phosphorescence in our wake twinkled with wild radiance.

The next 40hrs passed in a strange, wonderful continuum of 4 hour shifts, naps, brushing teeth, sun rises, star gazing, baking banana bread, and the occasional sail change from reacher to spinnaker and back. “Day or night, no matter. Our schedule revolves around the need to run the ship,” mumbled Ryan as if drunk, after a graveyard 1-4am shift. “It is a good delirium.”

Originally we had planned to visit Guadalupe Island, but now the Biosphere Reserve requires 10 day permits.We chose San Benito Island as an alternative because of its spectacular diving reputation and remotness.

Aldebaran dropped anchor around the corner from the fishing village. Once again, our Garmin Chartplotter insisted that we were on “dry land”, but nay, we were in a unbelievably scenic rocky cove, surrounded by tiny nooks FULL of elephant seals. 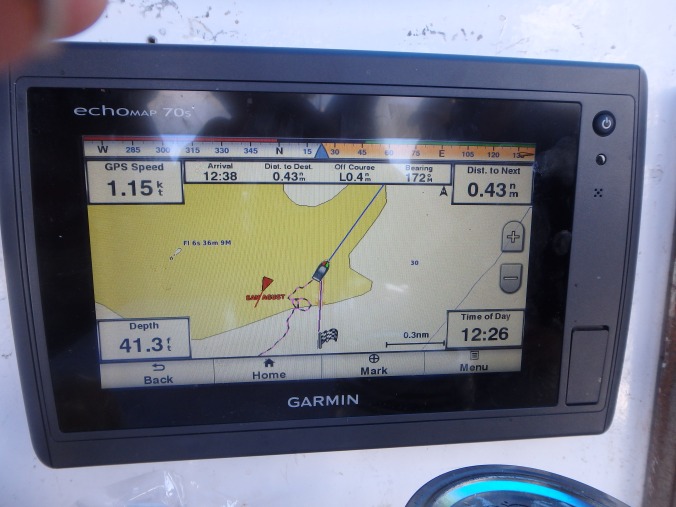 We had asked a local fisherman in a panga if he knew where the wrecks were, or good dive spots.  He responded with a stern look. “Cuidado con el Abulon!” Careful with the Abalone?  They might bite around here!

The cooperativa which manages the island’s fishery is VERY organized — they were worried about people catching their abalone and lobster (currently, they were out of season). They operate a tight ship which is an inspiration to other fisheries around the whole world. Check out Michael’s post about the Natividad cooperative’s efforts to tackle the effects of climate change. 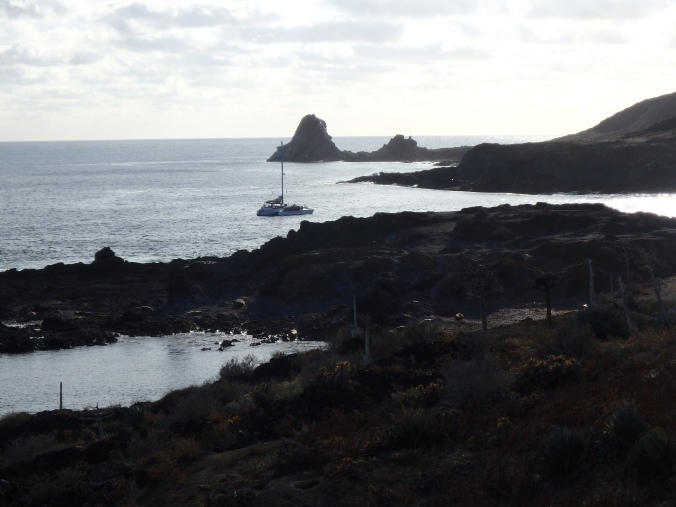 Pescado, however is a different ballgame, and we caught a big sheepshead for fillet dinner and brunch ceviche… Yum! The freediving out there was spectacular. The stiff yucca plants on the hillside, iconic of the desert landscape, mirrored the underwater flora. It was uncanny.

In the early morning we took the skiff to a pinnacle (“Rocas Pinaculo” 1nm offshore on the windward, exposed side of the island and SCUBA dove  to 80ft.. Lobsters in the hundreds stacked onto each other like people in a crowded subway during rush hour. Cuidado con el Abulon!  We were careful. Schools of jack perch swarmed with glittering silver. 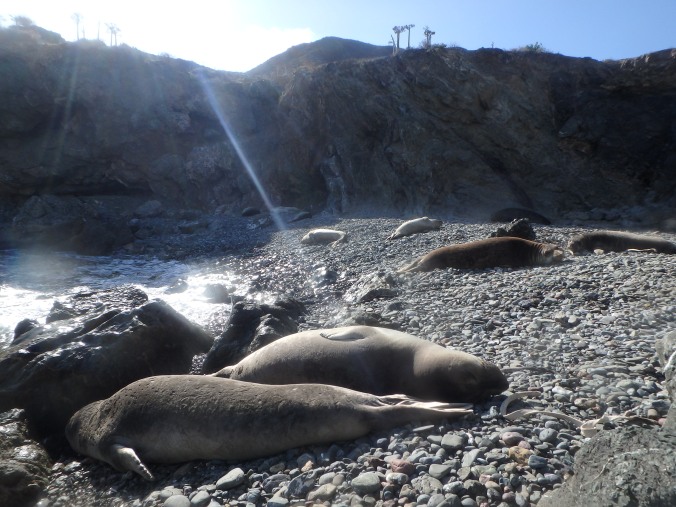 The trusty Luna Bell circumnavigated the island as we searched for wrecks, reportedly in the north coast per our dive guidebook. Eventually the lads went to the village and hiked to the old lighthouse, with its 1920s immaculate Parisian lens, and delapitaded construction. Everyone got some cholla spines stuck in the their feet.

Spirits remained high and we pulled anchor at 8pm, heading south to Isla Natividad, where we hoped to find waves on the building south swell. 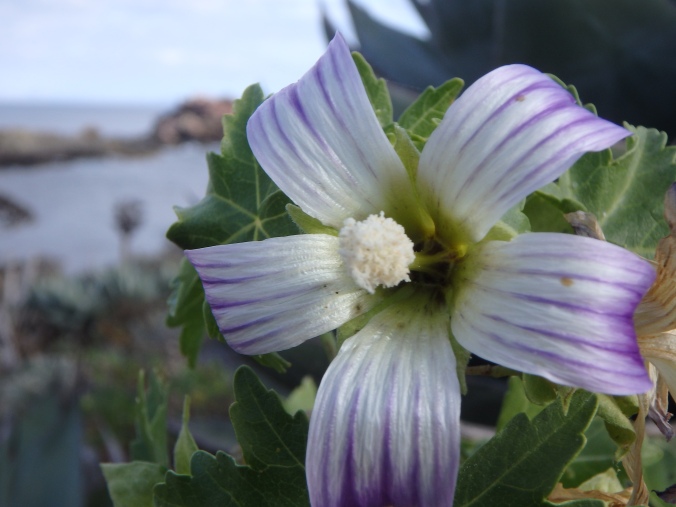 One thought on “The Outpost Islands of San Benito”