Late in the morning we motored out another 40nm to San Clemente Island, a military base within the Channel Islands chain. It was a stark contrast from the National Park islands we had recently visited – the barracks, industrial buildings, and mock “Baghdad” village looked mean. Scary helicopters flew overhead launching flares out into the ocean – live military exercises!

Most of the island zones were flagged ‘red’ due to this activity so we continued motoring to the south end in hopes we could spend the night. We found a safe little anchorage and tucked in for the evening. The following morning, under foggy skies, we hunted for a surf break near an area strewn with bullet-hole-riddled-junk we called “targets” but it wasn’t quite lining up despite the large swell. 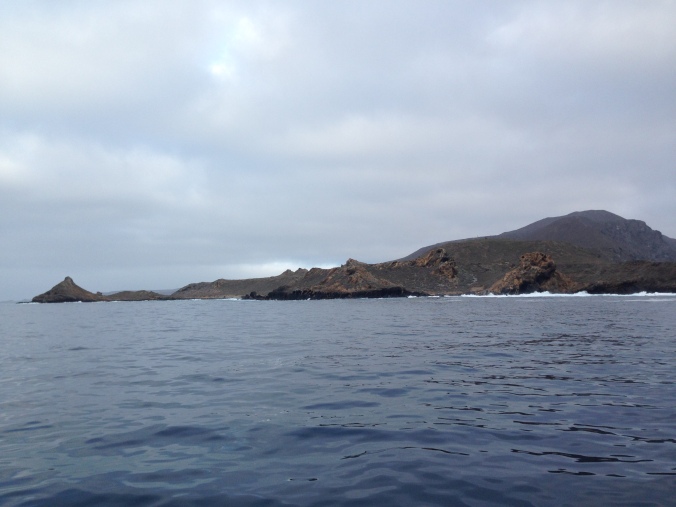 We eventually went around Pyramid Head on the southernmost tip, which marks a dramatic transition in the topography – suddenly the coastline turns precipitously steep with 300 foot cliffs. That is where we met Captain Moore of Alguita – the famous captain who “found” the Pacific Trash Gyre and helped bring that catastrophe to the public’s attention.

Hanging out with Captain Moore on Alguita

We went aboard his custom catamaran and asked him about the micro-plastics data we are collecting in collaboration with Adventurers and Scientists for Conservation (ASC); Capt. Moore was really supportive and sent us on our way with a signed copy of his book. The plastic problem is extremely serious and it is great to help bring some additional knowledge to science through the Green Coconut Run.

In the middle of the clear, deep, endless blue in the final 55nm passage to San Diego, we celebrated Captain Beadle’s birthday in grand style: we ate fresh sashimi from our 2nd bonita catch, and took a birthday-suit dip with visibility well over 100 feet and water temperatures in the 68 F degree mark.

We’ve only sailed one degree south and the temp is already warmer by 8 degrees! We snuck into San Diego harbor (Shelter Island public dock) as the sun sank below the horizon, just in time to make it out to dinner with Kristian’s brother and sister in law before they flew off to Australia. Happy Birthday Kristian: we all love you so much! We settled in to get some work done in our last USA stop before heading into “foreign waters”…

2 thoughts on “The Burly Military Island of San Clemente”