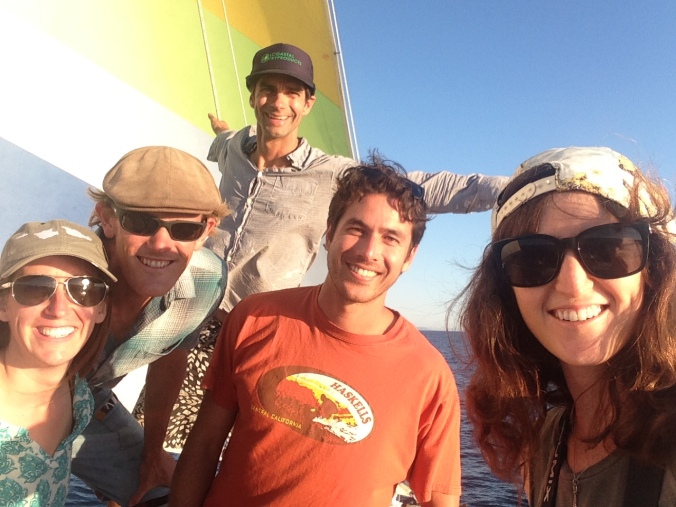 So cliché, yet so perfect: we sailed off into the sunset! Aldebaran left Santa Barbara Harbor 6:15pm on March 26, to begin our voyage: the Green Coconut Run.

The winds filled the big colorful headsail, the sun melted below the horizon, and we had one of the most magical channel crossings ever. Aldebaran was weighed down with hundreds of pounds of provisions, but she still zipped at 7 knots in the smooth, starry seas. It was as if Nature was on our side and cheering us on- giving us one final farewell gift! This is going to be one incredible story…

Slogging away 4 months in the Ventura Boatyard was terribly exhausting, but suddenly it all was worthwhile. The sight of the wind in our sails was surreal – we were heading off for the adventure of our lives!

We still reeled from the immense amount of work it took to physically untie the dock lines –from planning, packing, provisioning, and finding room for all our stuff. (yeah, we’re still working on the latter). But somehow we pulled it off and actually set sail despite the chaos.

Onboard Aldebaran were the 4 crew mates that are heading down Central America on this first season: Kristian the captain; Sabrina the nurse; Michael the fisherman; Ryan the ukelele-player. Joining us for the five day leg to San Diego was Annie the videographer, who decided to jump onboard less than 24hrs prior!

We spent two nights on Santa Cruz island. We pulled in long after dark and anchored at a beautiful protected anchorage near Smuggler’s Cove. The sheer golden cliffs provided a stunning contrast to the turquoise waters. The sun rose over Anacapa Island’s silhouetted pyramid-shape… this is one of our favorite sunrise spots in the world.

In the book “Care and Feeding of Offshore Crew”, Lin Pardey suggests taking a day off at a nearby anchorage after departing from home; all your provisioning and celebrating and last minute repairs inevitably turn the boat into utter chaos! This was certainly our case, things were ridiculously messy! We spent a glorious 36 hours ‘decompressing’ on the sunny, calm side of the island, riding waves and organizing the mess in the cabin.

It felt amazing to bask one last time in the beauty of our ‘home island’ before we ventured south to parts unknown.

Next up: The Mini Magical Island of Santa Barbara 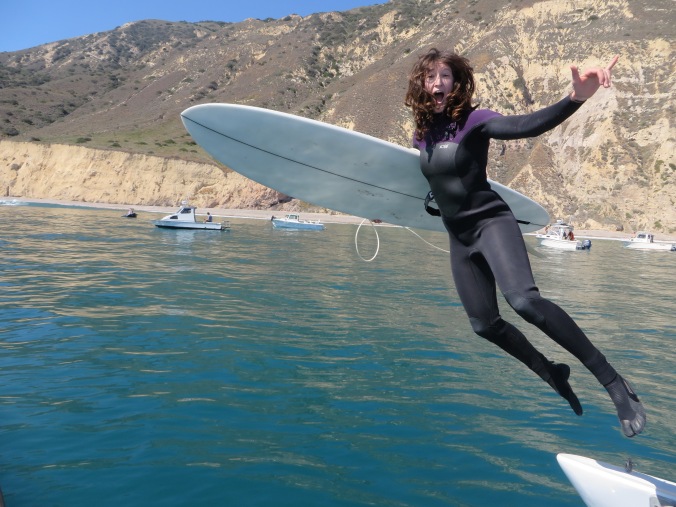