During our stint in the boatyard, Sabrina and I took time a few evenings to recharge our batteries, and help make our two week marathon-sprint of boat repairs a little more bearable. 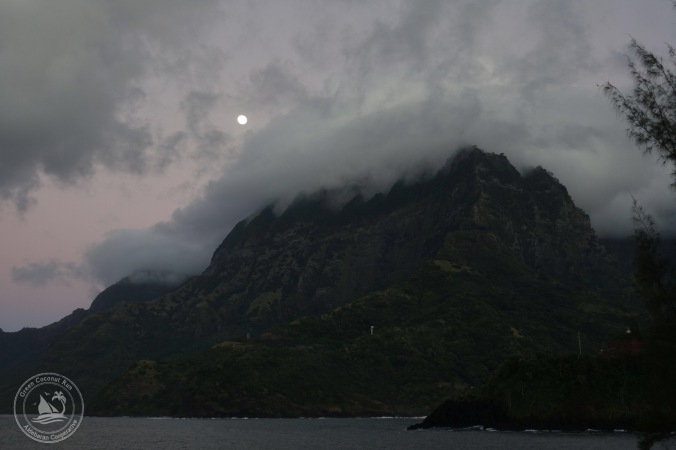 Every Wednesday evening at the “Search and Rescue’s” lookout station, a five minute walk from the boatyard, a BBQ fundraiser is held which lots of cruising sailors attend. Enjoying a $5 can of Hinano beer with a music jam by the open air fire, we met quite a number of young people cruising the high seas. Most of them were “hitchhiking” on boats (via find-a-crew type of websites), serving as crew members to help run night watches across the long Pacific passages. But there was also a surprising number of young sailboat owners (in the 25-45 year old range). This was very different from what we are used to back in Central America, where the overwhelming majority of boats were owned by retirees.

These younger sailors are normally looking for work along the way, or planning to sell their boats as soon as they arrive in New Zealand or Australia, and several also receive contributions from their crew members.

(Photo: a Swedish couple with dog and hitchhiking German fellow Durant balancing gingerly on an inflatable kayak, the only ‘dinghy’ aboard their 30ft sailboat powered by outboard-only, that they took around Cape Horn in a westward direction, after learning how to sail just months before underway in the French winter. These folks are seriously bad-ass)

The boatyard was as nice a community as we could hope for, and we were often invited to have lunch or dinner with other sailors on their land-locked boats. This helped our morale to carry on the daily toil of sanding fiberglass and filler, which seemed to never end.

Our energy level began to waver in the last week of work, and Sabrina and I took turns “crashing”. Our bodies were simply too run down by the intensity of the work. Beyond the dust, heat, and exertion, the worst physical effect of working with the heavy duty fiberglass from the boatyard was the unbearable, itchy rash it left on our skin.

We never experienced this problem before with the thin fiberglass we use back home. However, the thick fiberglass shards got through all four of the protective suits we had purchased, to the point we could no longer wear them; or for that matter, our long sleeve work clothes that were now also contaminated with fibers. The only saving grace was the cold pressure shower 30 yards from our boat, which we now used obsessively to cool off and wash off the grime.

In retrospect, we should have paid the local lady to launder our work clothes (@$20 per load!) but we were so disgusted by the high cost that we forgot about that possibility. My clothes made me itch like a madman, so I ended up working in old boardshorts and running into the shower every two hours to wash off my body.

Our departure from California in 2015 was at the tail end of four months of work at the Ventura Boatyard. I hoped that in the future we’d never have to do all that grizzly repair work of fiberglass and sanding the boat on our own again. I hoped we’d be able to hire help in affordable countries down the road. As fortune would have it, we ended up doing a haul out in Marquesas where labor is expensive.

The only thing that kept us in overdrive through days 10-14 was that the end was in sight. We frantically worked to make the most of the miraculous sunshine, which we knew could be interrupted by torrential rain any day. We were determined to finish since our friends were joining us in a few days, and Purgatory would soon be over and Aldebaran would be back where she belongs… in the water.

2 thoughts on “Ups and Downs in the Hiva Oa Boatyard”