100 miles east of Galapagos we spotted whale spouts. We steered towards them, but I was also apprehensive because of the history in this area: there’s a lot of stories of whales damaging yachts around here. Coincidence or not..? We were about to have an intense encounter with the cetaceans.

In the bathtub-calm conditions we maneuvered the boat near the whales. I made a point of not steering aggressively towards them, instead driving parallel to their path. That seems to make them more comfortable with our presence.

I also did not want to upset the whales. Of the stories I’ve heard of sailboats being damaged by whales, many occurred in the stretch of waters from Central America to the Galapagos and West several hundred miles. The stories are a combination of random collisions and aggressive “whale-watching” that turned sour. So I was approaching them conservatively.

Eventually we found ourselves surrounded by a group of 30 whales – they were spouting, throwing tails in the air, and even breaching. We couldn’t recognize them — perhaps they were pilot whales? I couldn’t have been more wrong!

We shut off the engine and let ourselves drift quietly. The whales swam by curiously directly off our stern. One even breached 100 yards in front of the boat as if to show off! They seemed super relaxed and happy to swim near us, so I decided to put my mask on and take a look underwater.

This idea was prompted by a previous experience. We had swam with humpback whales in the California Channel Islands; they had been super friendly. Similarly, these whales had a  calm demeanor, and we had already drifted among them for a mellow 30 minutes, with engine off for the last 10 minutes.

I jumped in the water and swam away from the boat. A minute later, Dominic hollers that a whale is heading our way from the opposite direction.

Underwater, I watch baffled as it swam with uncanny speed towards our stern. The whale had a square bulbous head unlike any I’ve ever seen in person. Holy Moby Dick – this was a sperm whale! I had never  considered that possibility, thinking sperm whales were rarely seen.

Later reading our whale guidebook, we learned that sperm whales are actually quite numerous and exhibit all the characteristics we saw; but they are always found in very deep water, so are rarely seen near land.

However, sperm whales are relatively common in the waters around the Galapagos. Since this archipelago is a “hotspot” of geological activity, it sprouts volcanos out of the deep ocean all around. This is especially true near the young islands of Isabela (on the opposite side of the archipelago), which has incredibly deep water just to the west. Naturally, Isabela Island became a hub for whaling ships in the 19th century looking for the oily “spermaceti” organ housed in these whales’ square heads.

This spermaceti organ is huge in proportion to the rest of the sperm whale’s body. It is a wax-like web of filaments which the whale uses to help it dive to enormous depths. Like a SCUBA diver’s BC (buoyancy control) vest, the spermaceti releases air/water to reduce the whale’s “floatation” and allow it to plunge faster to depths of 2000 meters. (Read more facts about sperm whales on this National Geographic site).  When it is ready to ascend, it re-absorbs air/water to increase floatation, so it can return quicker to the surface.

(If anyone out there can enhance this explanation, please do so in the comments section!)

Due to the high demand of spermaceti (which according to Britannica was used for ointments, cosmetics, and later industrial lubricants) whalers often targeted sperm whales. However, these are the largest “toothed” animals in the world (the blue whales and other behemoths are “baleens” and don’t chew food) and have a powerful predator instinct, fighting giant squid in the depths. 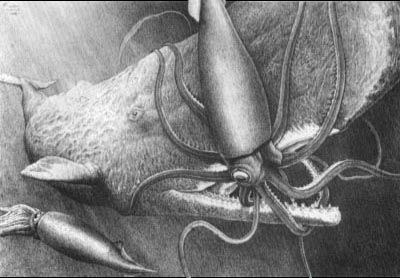 So the sperm whales began turning against the whale ships. In the 19th century at least 4 ships were sunk by sperm whales, and many others were rammed vigorously, the majority off the coast of South America. The most famous sinking was the Essex, which inspired Melville’s Moby Dick story, and stranded the crew of whalers on four lifeboats for a harrowing survival story.

Oh and did I mention the sperm whale is the only animal capable of swallowing an adult human whole? Hence the stories of Jonah and Pinnochio between swallowed by the giant “fish” ! (See their possible connection, and a clip from the Disney movie, it’s kinda scary!)

View of the sperm whale from the deck of the boat, approximately 36 inches behind our transom!

All this folklore and history is stored in our collective psyche somewhere, and in my case began flashing a red warning flag when I saw the whale’s square head and wrinkly skin.

To add to this anxiety, the whale approached the boat unexpectedly. It reached us quickly and made a sudden 90 degree turn; then simultaneously rolled toward the underside of the hull. Our rudder and prop looked terribly vulnerable with this big guy skimming its surface! I was very concerned the whale would damage the boat. Heck, I just fixed the rudder at great effort in mainland Ecuador, three weeks before!

Here’s the video of the Whale underwater! (Click here if not showing below)

(Did you hear the “clicking” noises made by the Sperm Whale in the video above?! These are sonar vocalizations which bounce off objects to give the whale an “aural image” of objects in the water, according to Carl Safina in NatGeo Voices. It also allows the whales to communicate and coordinate foraging activities, according to Andre & Kamminga [2000] as reported in Wikipedia)

Although it was a smallish individual in the 25ft range, the whale’s massive tail came swishing towards me, closer than comfortable. It now sought propulsion away from the vessel, turning and speeding away about 100 feet, where it halted and joined a another buddy whale. They communed for a minute then swam away together.

Now the angle from the deck! (Click here if not showing below)

Sabrina called to me and broke the transfixed spell I was in, and I got back onboard. She was frightened for my safety, as the whale had behaved quite erratically.

But was the whale acting aggressively? The perplexed crew of Aldebaran had many theories.

“Maybe he was scratching his back.”

“Maybe he was like that fish in Finding Dory. ‘Look guys I touched the butt!'”

“Maybe he was protecting his territory when you got in the water, he came right after you jumped in.”

We left the encounter with the sperm whale thinking about our mortality, the history of humans hunting animals, and in general, feeling awe of nature. 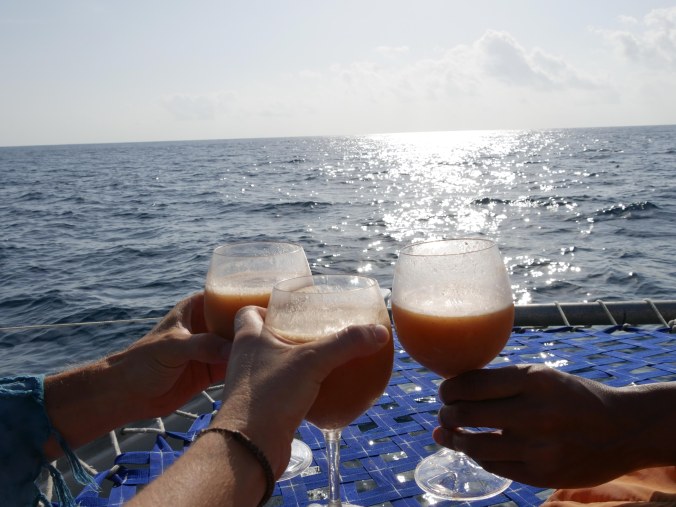 How best to cope with all these complex emotions? Have a cocktail! We enjoyed the sunset and companionship with our three crew aboard. We let the autopilot steer us west for the last 100 miles towards the Galapagos islands.

Cocktails are a great tool for decompression ! These were mango smoothies with rum and ginger, in case you’re wondering …

7 thoughts on “Encounter with Sperm Whales near Galapagos”