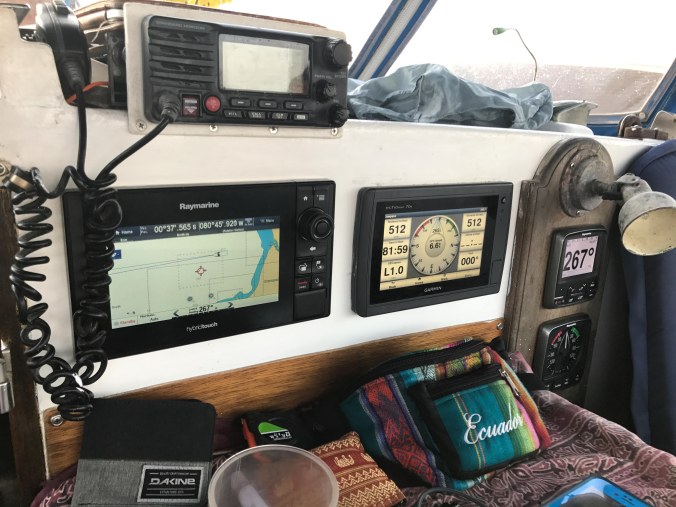 Our 4 day passage from mainland Ecuador to Galapagos was ultra mellow — in contrast with our passage last year from Costa Rica!

Read below about our 3 crossings to and from the Enchanted Isles (our latest in February;  last year’s in June and September). 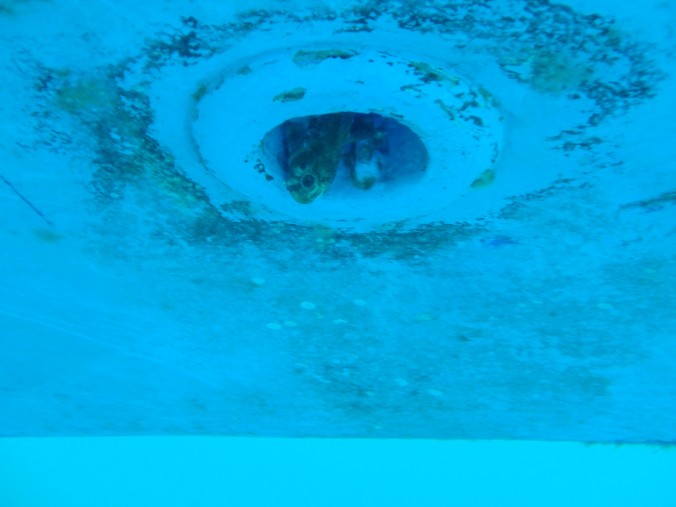 Cleaning the hull enroute during our “swim breaks”, we found a little sculpin living in a thru-hull. Galapagos requires that you hull is completely free of barnacles and oil in the bilge for entry. 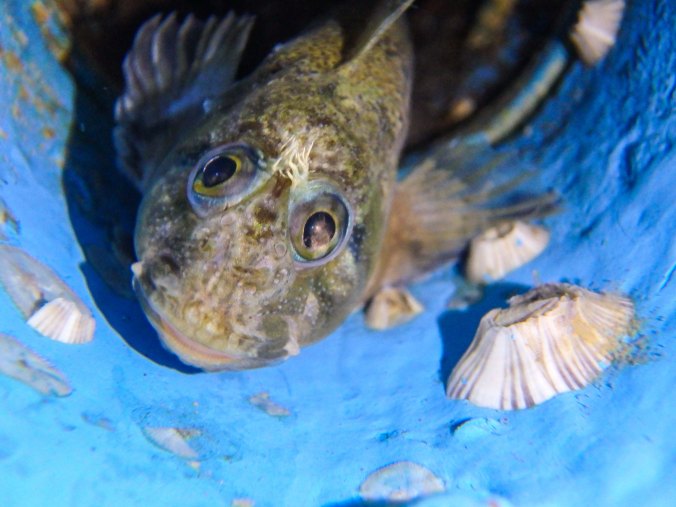 Close up of the sculpin living in our thru-hull. Barnacles hiding inside the thru-hull have caused the Galapagos National Park to reject several cruisers; they need to go 40 miles offshore to scrub their hull. Sorry little sculpin fish, we gotta clean your home!

This was our most recent passage. Most of the time the conditions were glassy with hardly a breath of wind. We motored Mr. Isuzu, our 55hp diesel, almost around the clock, and stopped for swim breaks at 2pm each day to refresh and clean the hull. The ocean was a bathtub, either no wind or light breeze 2-6 knots out of the east. There were a few hours with wind edging on 9 knots. Using the spinnaker downwind got us anything from 2.5 knots to 5.5 knots of speed when the breeze strengthened. 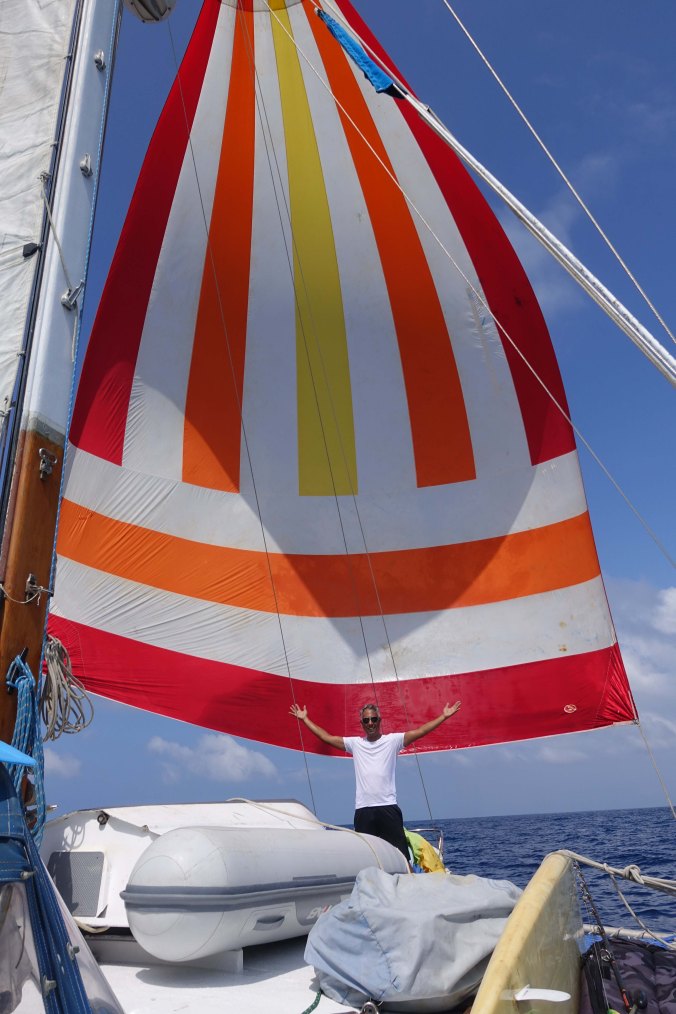 Dominic was our crew for the four day, 560nm passage, to Galapagos.

A strong 1 – 1.5 knot favorable current propelled us toward the Enchanted Isles. We usually motor at 6 knots (on our 42ft trimaran) but we were making 7 knots, sometimes 7.5 knots. We arrived 3 and a half days after we left, covering 560nm in 90 hours underway. It was a fast and easy passage, but only limited time with sails up. 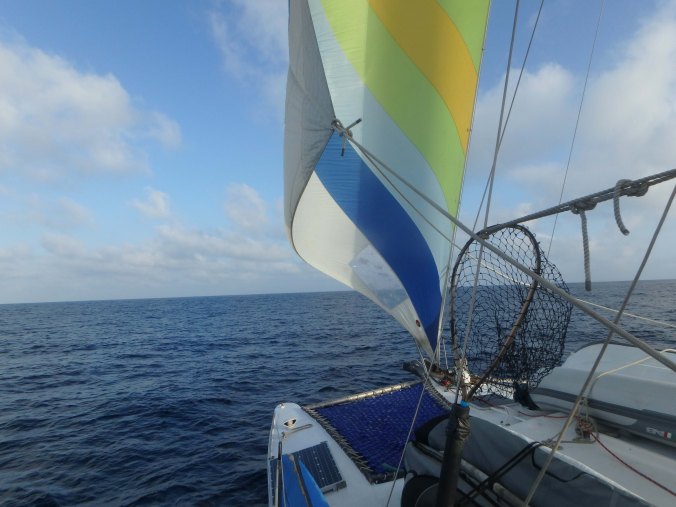 At night and when the crew is sleeping early morning, we use the reacher instead of the spinnaker — it is much easier to handle!

We also spoke to several boats that sailed from Panama. Many reported good winds and light seas, but calms requiring motoring on the last 2 days. The predominant wind they sailed with was NE trade winds pushing down from the Caribbean, without any issues of crossing the notorious Inter-tropical Convergence Zone (ITCZ). They said it was favorable to wait for a high pressure which strengthens those NE winds and “ride them south” to Galapagos.

There were also sailors from Bahia Caraquez that managed to get the “dregs” of this strengthened trade wind condition, and sail almost every day from mainland Ecuador to Galapagos with light north-easterlies. 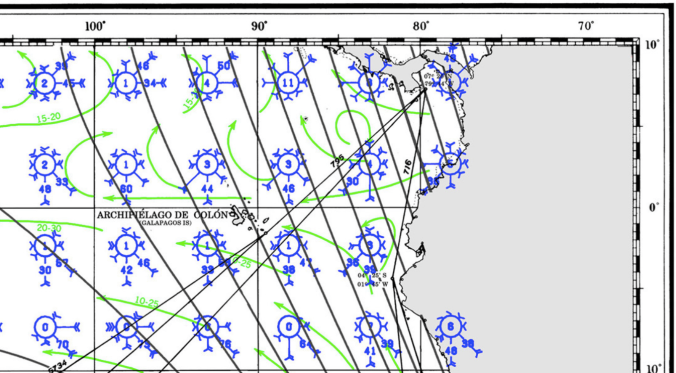 Pilot Charts of the area for January. This basically says that the predominant wind will be south or south-east between Galapagos and Panama. We saw that wind pattern in May-Oct, but during the Dec-Apr timeframe, we’ve seen a lot more light north-easterlies in this region. This might also be a year-to-year shift driven by El Niño and other influences though. 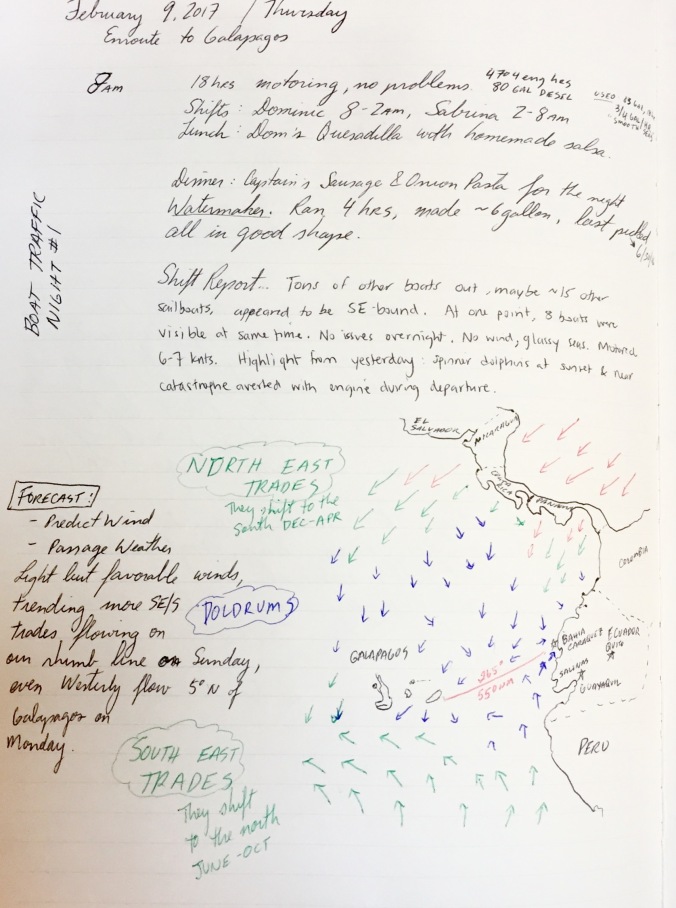 Our poor artists rendition of wind patterns Jan/Feb. Galapagos exactly straddles the area between the NE and SE trade winds, the “doldrums”, which shifts throughout the year as shown in the drawing above .

Last year, after exploring Panama’s Chiriqui region for over a month in May ‘16 – the area from Santa Catalina to Isla Coiba to David – we returned to Costa Rica. The rain was getting intense!  In order to visit, Isla del Coco, the world-famous diving destination, and a departure from a Costa Rican port is required. We secured the complicated permits, which required notarized copies of our documents, mailed to the national park office in San Jose.

“Do you love going upwind??” asked sailors of our plans to head south in June. After all the predominant wind this time of year is from the South. The NE trade wind backs off during the wet period (May-October) and the South wind strengthens. Near the continent this is a SW wind, but then it veers to S halfway to Galapagos, and then finally one reaches the actual SE trades. 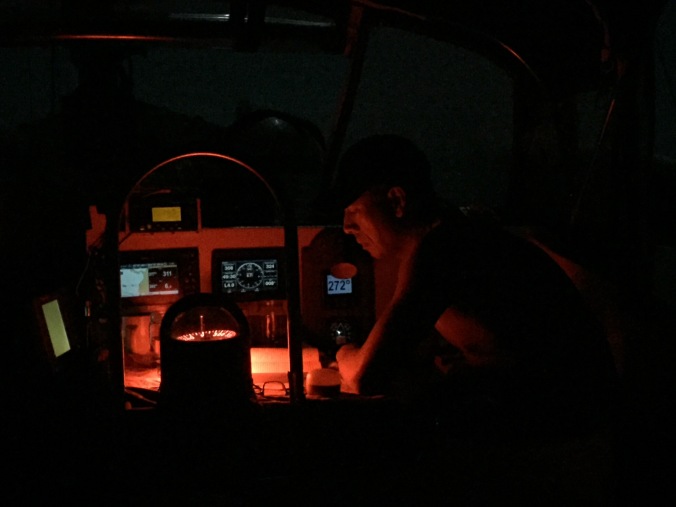 Contrary to what you’d think, everyone seems to look forward to staying up during their night shift.  It’s  a quiet time to do some reading, watch the stars, etc… When the autopilot is driving, just need to check every 15 minutes: the gauges, instruments, and scan the horizon. 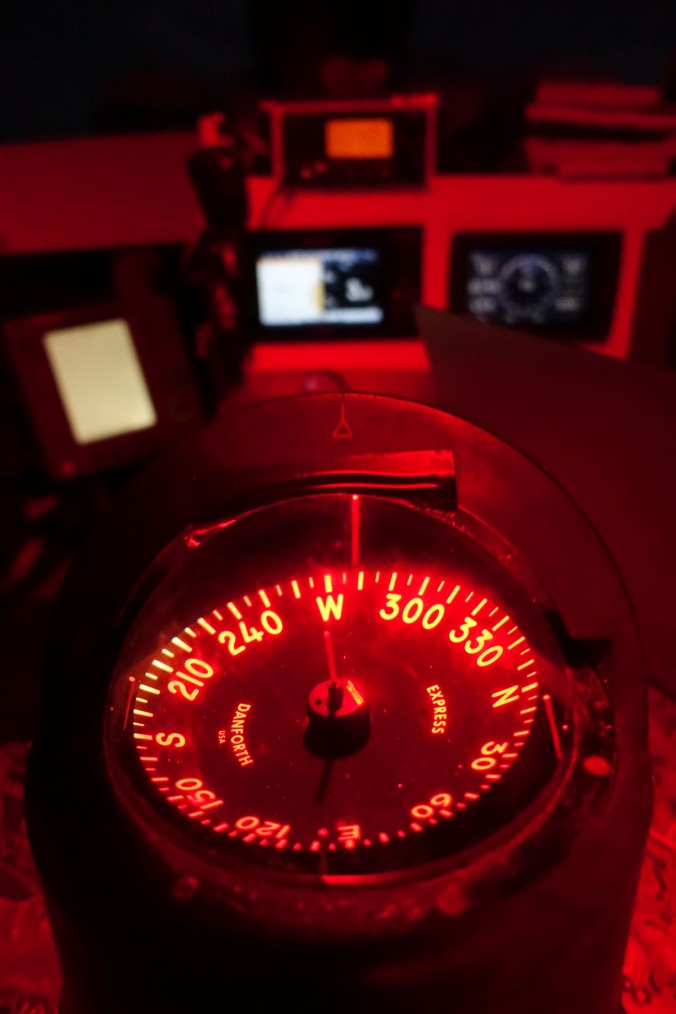 During that passage from Costa Rica in June, we lucked out and motored with glassy seas to Isla del Coco (see our pictures on Flickr from this astounding island), but then to Galapagos we got 8-12 knots directly on the head (SSW wind and course) for the first 3 days… by day, we tacked the old trimaran upwind but progress was slow. By night, we usually just motored into the speed bumps of the ocean. Then the wind veered to S and SSE so we could sail better, with the wind 45 degrees off the bow for the last 3 days of the passage. Overall the seas were small but heading upwind was rough on the crew and boat. In retrospect, sailing from Isla del Coco to mainland Ecuador would have been a lot easier, as the course would have been ESE, with wind off the starboard bow. 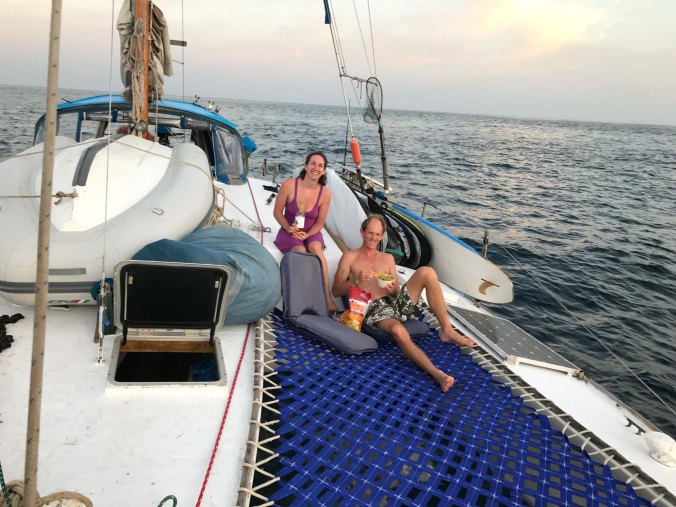 Sunset watching “Happy Hour” on the nets heading west into the sunset.

The SE trades fill fully in the Galapagos during the June to October period. Last year at the end of our stay in Galapagos, we sailed almost the entire way back to mainland Ecuador, with the wind starting on our nose (coming from SE) then veering to a beam reach (out of the S) and finally a broad reach (out of the SW).  Unfortunately the same current that would help us in February, would hinder us as this was opposite to its direction, and the passage took us 5 nights. Still, it was really mellow and easy sailing. 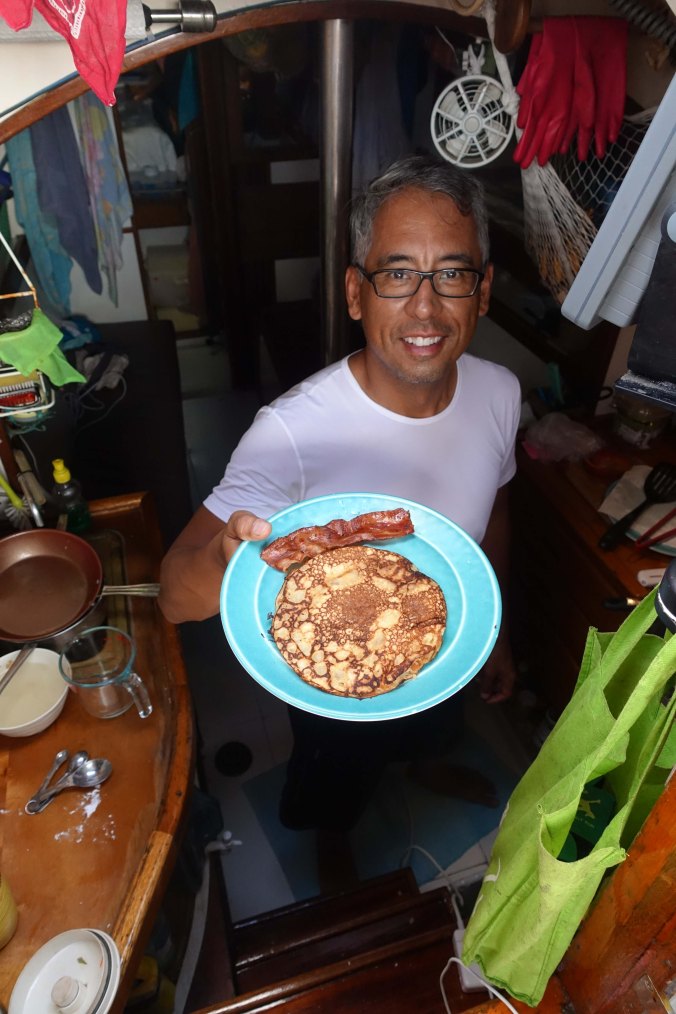 For food, we always take turns: one person is always in charge of making the meal for the entire crew (e.g. dinner). The next person on the roster (e.g. breakfast) is in charge of dishes. Here Dominic shows us the joys of the pancake/bacon combo. 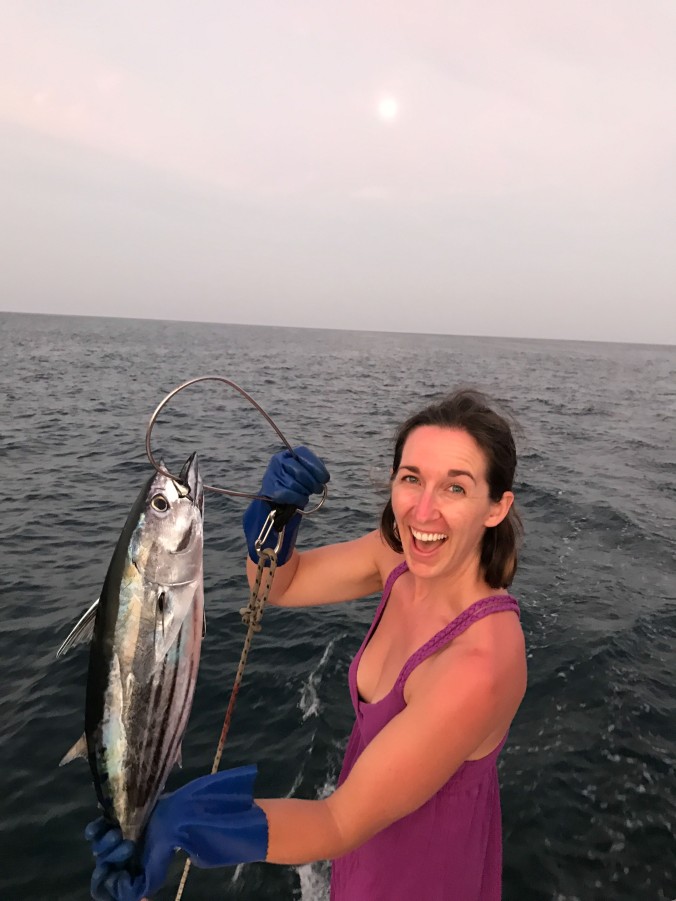 Catching fish during passages always ups the morale!! After long periods of quiet, to have the line zinging on the reels is exciting… with the yummy meals that follow.  This was our first fish this year, and we had just re-strung new lines and reels. 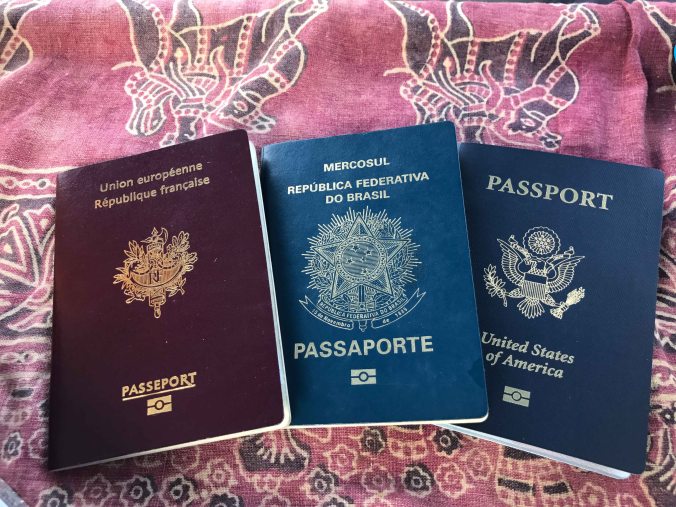 Arriving in the Galapagos, we used a range of passports… Sabrina is using her French passport as we’re going next to French Polynesia; Kristian is using his Brazilian passport as his U.S. passport was left with the French consulate in San Francisco to finalize his Visa for French Polynesia… more on that later. 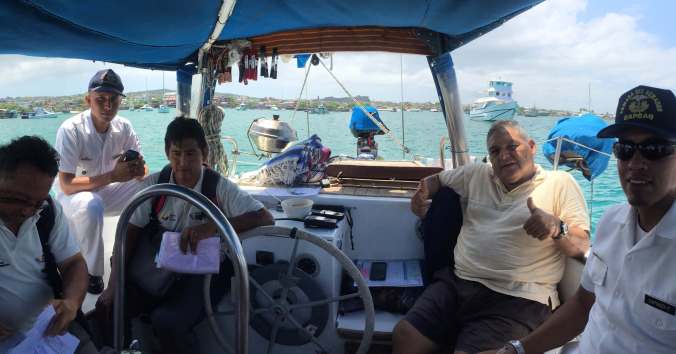 Galapagos welcome committee… Bolivar is our agent (cream shirt, on the right) and always is professional and super friendly. He can be reached at bolivar.pesantes@hotmail.com . Agents are required for entry in the Galapagos.

6 thoughts on “Passages to Galapagos”