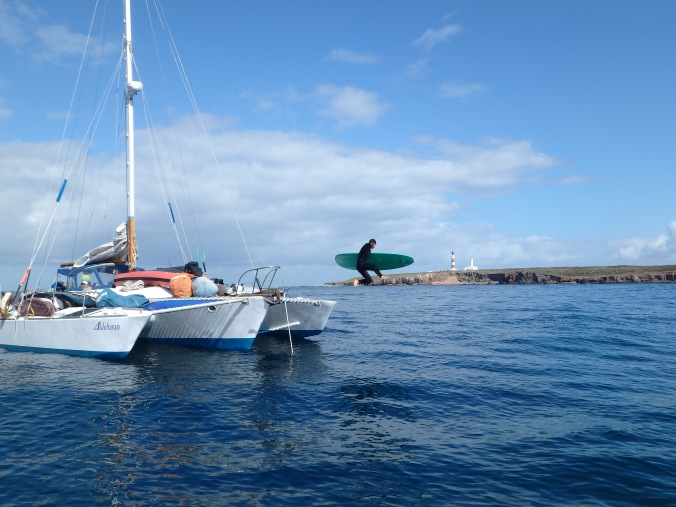 A compounding mistake.  My friend Kyber’s word echoed “Todos has some sketchy anchorages” as we pulled into Todos Santos Island, 8nm west of Ensenada, slightly after dark.

We checked our cruising guides (Charlies Charts and Rains’ Mexico Boating Guide) which had detailed info but were out of date — the abalone aquaculture farm had expanded its operations, from what we could see in the dismal light, and there was no longer space for anchoring in the north corner of the East island.  It was 150feet deep with buoys all around us, and a skiff taking up the interior cove. 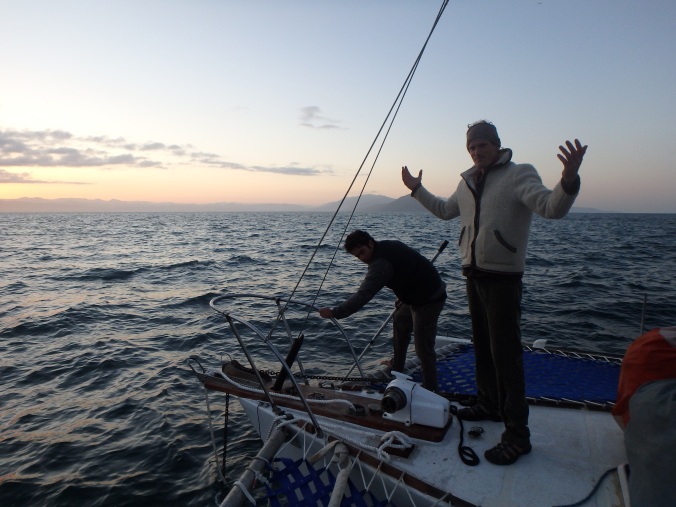 Now we discovered the true incompetence of our fancy new electronic Garmin charts, which is a beautiful machine, but unfortunately indicated that we were on dry land multiple times… unless Aldebaran is a amphibious vehicle, which could possibly be its next evolution, I’m pretty sure the charts are completely useless for near-shore navigation. 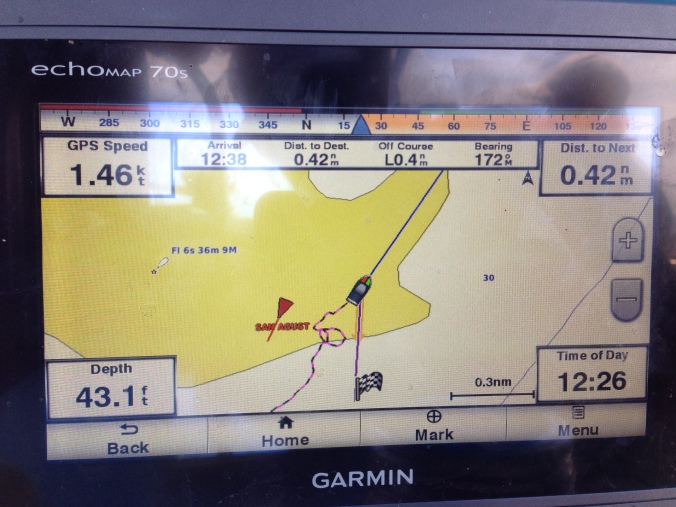 The result: we scouted our way with trepidation in the pitch black to another cove with scary rocks just below the waters edge, and slept erratically through a night of shifty winds, but we were rewarded with an outstanding view in the morning: the jagged rocky ridges of Todos Santos Island bathed in sunrise light.

We had suspected that our anchor chain was snagged under a rock, and indeed this was the case… no amount of cajolling by our windlass and boat maneuvers pulled it free. Team SCUBA (Ryan and Sabrina, in this case) jumped in and we shocked to experience that the water had actually dropped 10 degrees to 58F !! 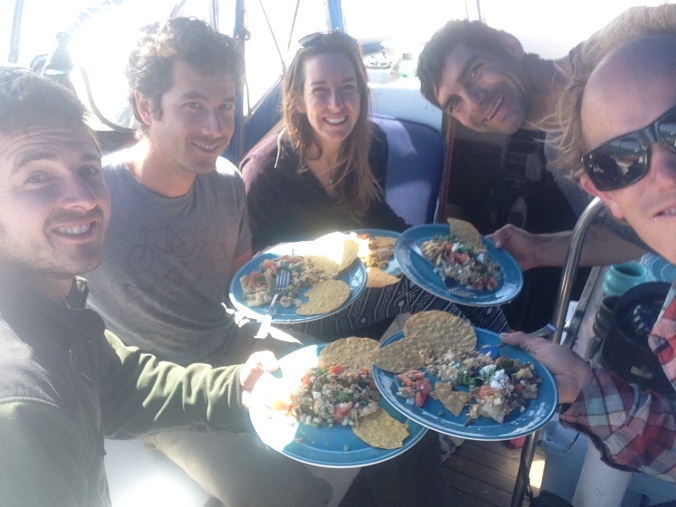 They freed the anchor in 40ft of water and we cruised around to the north island, which is separated by a very narrow, impassable channel, and spent the morning paddling SUPs, getting longboard waves, and diving the kelp beds, before sailing back to Ensenada at 7 knots with the freshening breeze. 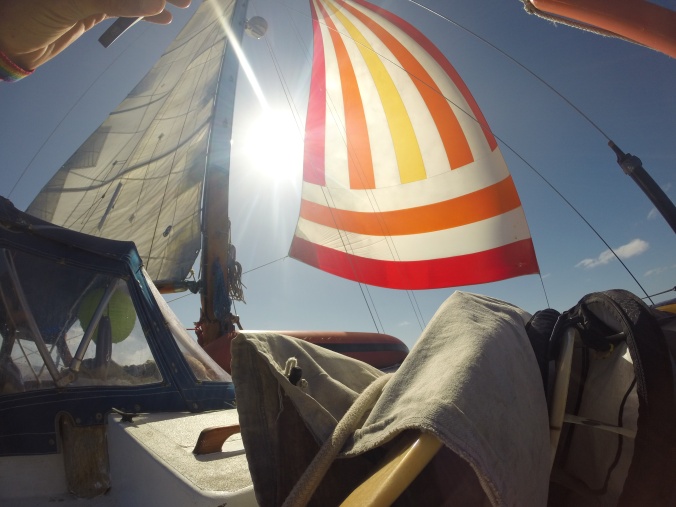 Cruiser port Marina welcomed us, Henrique the assistant manager was super friendly, and drove us around to deal with paperwork.  Security was great in the marina and we had a productive 2 nights as we got our paperwork together for checking into the country.  All told it was a very civilized way to enter a country! 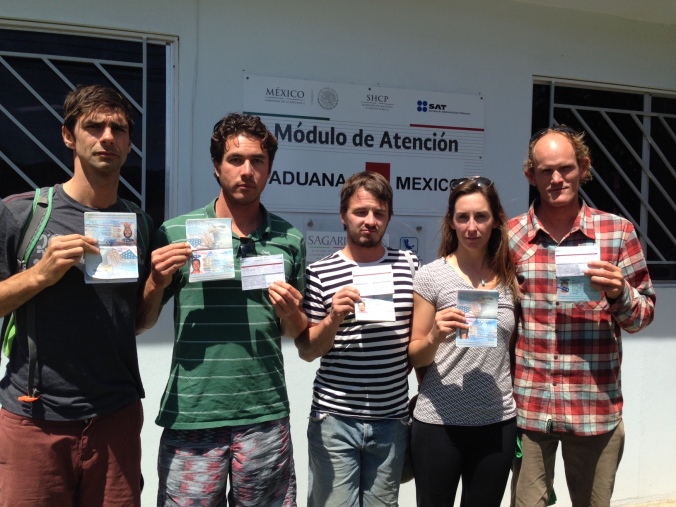 Where to from here? We originally had ambitions to visit Guadalupe Island… but permits required 10 days! Furthermore the best time of the year to see the monstrous great white sharks is fall/winter, so no dive operators would be out there. We look further south at the map… Isla San Benitos, just west of the big Cedros Island, had great reports of diving. 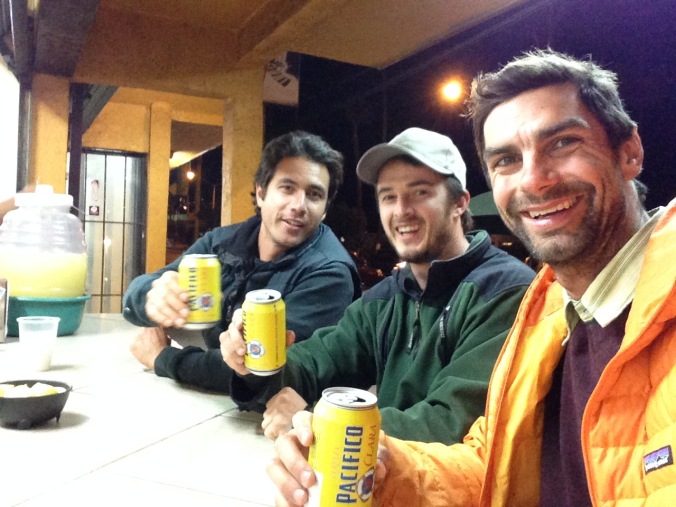 Distance: 200nm. We figured averaging 5 knots (our cruising speed is 5-8knots but sailboats like to zig-zag on tacks) so about 40hours. This would be our first big ocean crossing… 2 nights at sea. 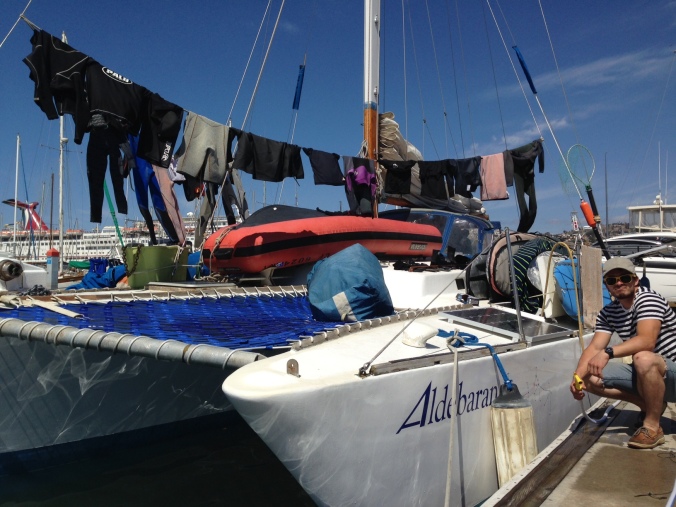 The boat demanded some more elbow grease… securing the hinges on the hatches, fixing the radar backlight. Crew worked hard into the evening and we took off at noon on April 8th, beating into a smooth headwind to get around Punta Banda, and set south… free and clear.